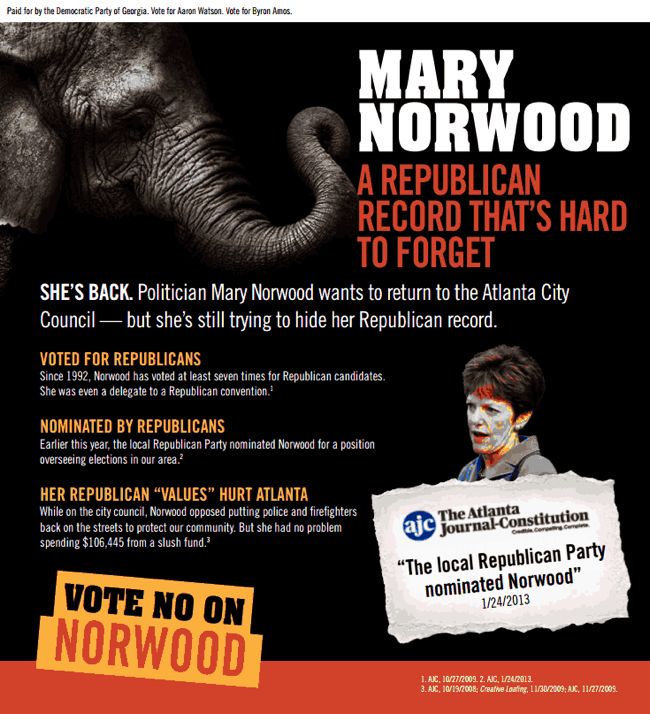 Georgia's Democratic Party is attacking Mary Norwood and her “Republican Values” as she attempts a return to the Atlanta City Council. But the gay-popular politician has backed gay marriage longer than the state party.

Norwood enjoyed a big heaping of LGBT support when she nearly beat Mayor Kasim Reed in 2009, in large part over her backing of marriage equality and support for other LGBT issues. As she attempts to unseat Aaron Watson and return to the council, she's still flying rainbow flags in campaign flyers (below).

But state Dems are apparently fretting over the race, sending out a recent mailing attacking Norwood in a City Council race that's supposed to be non-partisan. “Her Republican 'Values' Hurt Atlanta,” the flyer above screams, with little apparent regard that “Republican 'Values'” is often code for homophobes reaching out to their right-wing base.

Yet Norwood celebrates her “values” in one of her campaign flyers.

EQUALITY FOR ALL: Mary Norwood was one of the first Atlanta elected officials to stand up for marriage equality for all people, because Mary simply will not support discrimination of any kind.”

Norwood's campaign mailer is one of the most pro-gay among city candidates, even including awards she received from the readers of the GA Voice. That's in sharp contrast to a campaign video from Reed, who is coasting to re-election and backing Watson with a new PAC. Politicos speculate that Reed is behind the state party's attack ad.

Attacking a popular, gay-friendly candidate is an odd move for state Democrats, who have been working in recent months to shore up LGBT support and donors. The party's new chair, DuBose Porter, loudly proclaimed that he's evolved from his gay marriage opposition during his days in the General Assembly to fully embracing it and other gay issues. Party leadership first backed gay marriage in 2012, years after Norwood did so during her mayoral campaign.

Norwood's been endorsed by the Georgia Log Cabin Republicans. And with her embrace of LGBT issues again and again, it's the sort of “Republican Values” Atlanta needs more of because, for now, we're stuck with these GOP haters. 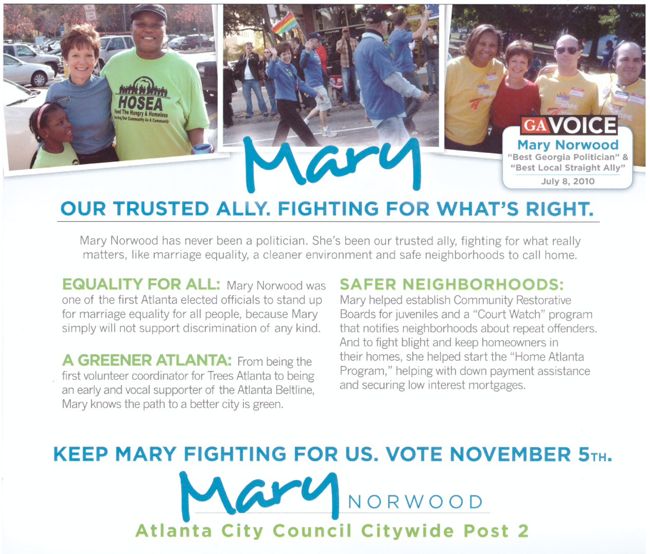