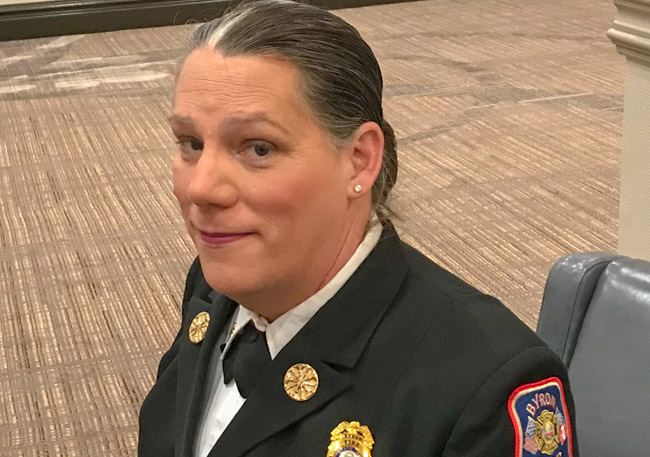 The City of Byron, Ga., fired its fire chief over alleged performance issues, but attorneys for the transgender woman called the move discriminatory.

Rachel Mosby joined the Byron Fire Department in 2007, became chief in 2008 and came out as trans in 2017. She did several media interviews recently to talk about the experience, including one with Project Q Atlanta in May.

The city outlined three reasons for Mosby’s firing in a letter from City Administrator Derick W. Hayes to Mosby on June 4, according to the Macon Telegraph.

▪ Failed to release new and renewal business licenses for approval in a timely manner, causing undue delays in customers’ requests. The letter noted that this has been issue since late last year and that Mosby has been notified via email and at staff meetings.
▪ Attended only five of 21 classes offered at the Georgia Association of Fire Chiefs conference earlier this year. The letter noted Mosby didn’t take any classes the first two full days of attendance “which cost travel monies that should not have been spent.”
▪ Failed to maintain fire investigator certification required in the city’s job description for fire chief. The letter noted that Mosby attended the arson investigation class twice at the city’s expense, but failed to maintain the certification.

“The city no longer has confidence in your ability to lead our fire department,” Hayes added.

Kenneth E. Barton, Mosby’s attorney, said the city violated her constitutional rights and that they are considering legal action, according to a statement Barton sent to Fox 24.

Over the last 12 years, Fire Chief Rachel Mosby has proudly served the residents of Byron, where she has built Byron’s Fire Department from an all-volunteer organization into the professional agency that it is today. She was shocked on Tuesday when she was notified of her termination, effectively immediately, and escorted out of her office by a police officer the same day.

While her coming out as transgender at work received local media attention, nothing has distracted Chief Mosby from her duties of protecting the citizens of Byron. Chief Mosby has and maintained all of the necessary certifications for her position, and there is nothing about Chief Mosby’s performance that warranted her termination. Quite simply, the City’s stated reasons are untrue. If this termination had occurred just a few months ago, Chief Mosby would have requested an appeal. However, due to a recent change in their policies, Chief Mosby is the first department head in Byron who has absolutely no recourse internally with the City.

The City’s termination of Chief Mosby was, in fact, discriminatory and a violation of her constitutional right of due process. It is unfortunate that the City chose to single out one of its long-time employees because of her gender.

We hope that the City will reconsider its termination and allow her to continue serving her fellow residents of Byron as its Fire Chief. If we are unable to resolve this matter, Chief Mosby is considering all of her legal options.

Barton said Mosby has several options available to her, including filing a discrimination charge the Equal Employment Opportunity Commission, according to the Macon Telegraph.

Mosby was the first openly transgender fire chief in the U.S., according to the International EMS & Firefighters Pride Alliance.

She told Project Q in May that she received support from her superiors, the city council and from her firefighters after coming out.