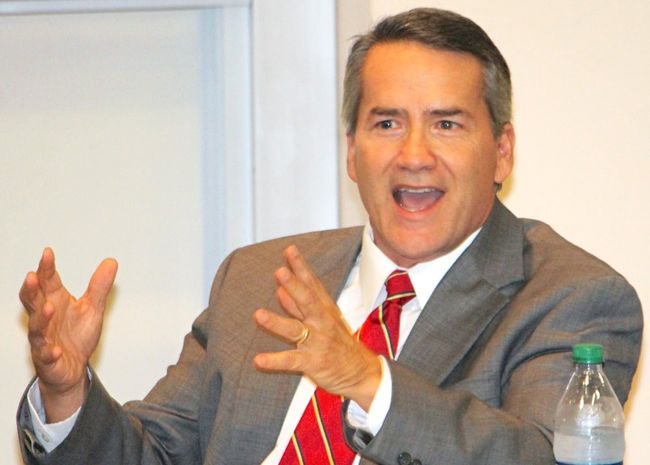 The wheels finally came off the GOP crazy wagon in a metro Atlanta Congressional race, with one of two candidates in the runoff ranting about a secret plot by the gays to recruit and sodomize children.

It’s a surprise even in a race to replace wingnut U.S. Rep. Paul Broun, one of several anti-gay candidates who lost in Tuesday’s GOP primary for Georgia’s open U.S. Senate seat.

We touched on Jody Hice’s 2012 book, “It’s Now Or Never: A Call to Reclaim America,” and its obsession with the gays in a rundown of the homophobes in the race for the 10th Congressional District, which includes slices of metro Atlanta and Athens. But not until Mother Jones did a deep dive this week did the full force of Hice’s lust for crazy anti-gay venom surface.

In a 2012 book, that candidate—pastor and talk radio host Jody Hice—alleges the gay community has a secret plot to recruit and sodomize children. In It’s Now or Never: A Call to Reclaim America, Hice also asserts that supporters of abortion rights are worse than Hitler and compares gay relationships to bestiality and incest. He proposes that Muslims be stripped of their First Amendment rights.

Hice claims homosexuality causes shorter life spans and depression, and he insists same-sex couples cannot raise healthy children. He writes, “Some ask the question, ‘How does same-sex ‘marriage’ threaten your  marriage?’,” he writes. “The answer is similar to asking, ‘How does a trashy neighborhood affect you?’ It might not affect you at all on a personal level. But, we are not talking about ‘a’ same-sex marriage. We are talking about an effort to redefine marriage, and that would have drastic results and irreversible consequences!”

Hice emphasizes that “love” is a shallow and insufficient basis for marriage. “The concept of ‘love’ is not the issue when it comes to marriage!” he writes. “People love all kinds of other people and things, but that does not grant permission for marriage. It is illegal to marry a child or a sibling. It is illegal to marry a pet, which many people love dearly.” He claims that Christians who speak out against the evils of homosexuality are persecuted—and as a result of gay manipulation, “the nation’s entire system of justice is being destroyed.”

There’s still more, including Hice quoting at length from a column suggesting that gay people prey on children. Except he missed the sentence that says the entire piece he borrowed from his satirical.

Not that Hice’s opponent in the GOP runoff, Mike Collins, is much better on LGBT issues. Just not quite as fanatical.

Marriage is between one man and one woman.  The fact that we have to debate this basic fact is truly unfortunate.  I will not negotiate on this position and will not support any legislation to the contrary.

That’s a statement from Collins’ campaign website. Ironically, on the same page where he spends twice as many sentences to discuss his support for “individual liberty.”

Hamilton, Ga., Mayor Pro Tem Ransom Farley was around 11 or 12 years old when his grandmother told him he was “special.” He realized what...
Read more
News

When Liz Ordiales became the first openly LGBTQ mayor of Hiawassee in 2017, there was some resistance in the city of 900 people in...
Read more
News