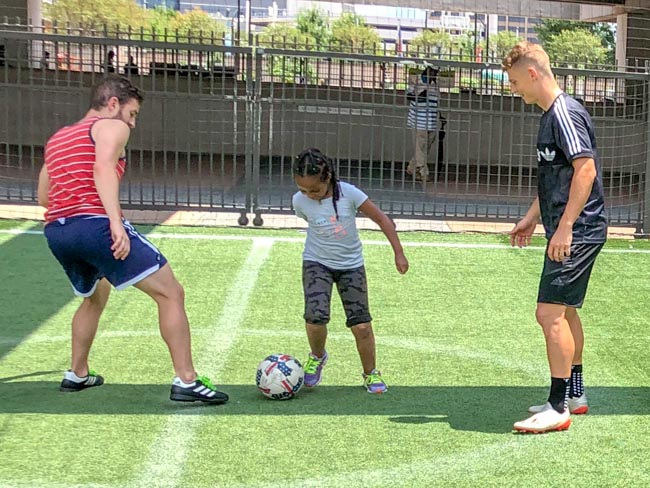 One lucky group of Atlanta kids learned how to play soccer thanks to professional athlete Gordon Wild and a loyal LGBTQ alliance.

The event was a success, according to Georgia Beer Garden owner Johnny Martinez. He and co-owner Brandon Ley also run Joystick Gamebar.

“Gordon, the All Stripes and Soccer in the Streets all went to great lengths to give the kids a class they would both enjoy and learn from and it showed,” Martinez told Project Q Atlanta. “It was a good day.”

Soccer in the Streets is the non-profit that runs Station Soccer.

Georgia Beer Garden has been “an incredible community partner” for All Stripes, according to David Prophitt, the group’s president.

“Johnny, [general manager] Ian [Carlson], Brandon and the entire staff are like family to us. They have become friends that we love to see when visiting the bar,” he told Project Q.

The event was a continuation of All Stripes’ charitable work in the community, according to Ryan Keesee, the group’s philanthropy chair (photo left).

“I think for this particular event we wanted LGBTQ+ individuals having a coaching or mentoring presence among youth in Atlanta to demonstrate we too can be athletic, supportive and fun,” he said. “For LGBTQ+ youth, it can be super important to have a mentor that shares this type of affinity, so we hope to increase these types of opportunities that unite our members with the community.”

Georgia Beer Garden and All Stripes share a similar mission, according to Martinez.

“It’s important for Georgia Beer Garden to partner with the All Stripes on events like this because, like them, we feel we should give back to the communities we are in,” he said. “It’s also important for communities who may not often interact with gay people to be able to do so over something we can all enjoy together, like soccer.”

Atlanta United waived Wild in July and he now plays for D.C. United.

LGBT Atlanta shows out in unexpected ways sometimes. That certainly goes for one of the NFL’s only out gay cheerleaders, Ben Ajani. But even...
Read more
Community