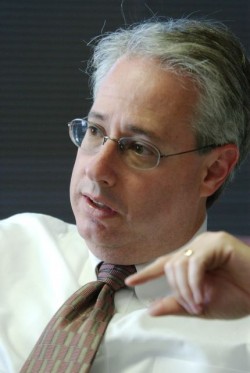 Georgia Attorney General Sam Olens blasted King & Spalding for dropping its defense of the federal gay marriage ban, criticizing the Atlanta-based firm for a move that “sets a dangerous precedent and could have a chilling effect on law firms.” Olens (photo), a Cobb County Republican who took office in January, delivered the rebuke of the law firm on Wednesday during an appearance before the Glynn County Bar Association in south Georgia. The state’s top lawyer says that despite any moral misgivings critics have over the Defense of Marriage Act, the 1996 federal ban on same-sex unions, that King & Spalding was obligated to continue its contract to defend it and not buckle to pressure to drop the matter. “King & Spalding said that lack of proper vetting was the reason for abandoning the case, but abrupt withdrawal of a client because of unpopularity sets a dangerous precedent and could have a chilling effect on law firms,” Olens said, according to a copy of his speech released by his office. “Interestingly enough, this same firm has represented Guantanamo detainees,” he added. On April 14, King & Spalding partner Paul Clement, a former U.S. Solicitor in the firm’s Washington, D.C. office, signed a $520-per-hour, $500,000 contract with Republicans in the U.S. House to take charge of defending DOMA from legal challenges. Earlier this year, President Obama ordered his administration to drop efforts to defend the ban. King & Spalding was quickly embroiled in controversy over the move, with the Human Rights Campaign questioning why a firm with such a gay-friendly track record would take on the DOMA case. The firm was also criticized for including a clause in its DOMA contract that placed a gag order on its nearly 800 attorneys and prevented them from speaking out in favor of measures that support same-sex marriage. Less than two weeks later, on April 25, the firm issued a terse statement announcing is withdrawal from the case and Clement quit. The move was applauded by LGBT activists and HRC, which was crafting a campaign targeting the law firm’s clients and attorney recruiting efforts, but King & Spalding faced a fresh round of criticism from conservatives. While some of the firm’s Fortune 500 clients, including Atlanta-based Coca-Cola worked behind the scenes to convince King & Spalding to drop its DOMA defense, the National Rifle Association and Virginia’s attorney general dropped it from their roster of law firms when it pulled back from the DOMA case. On Thursday the anti-gay National Organization for Marriage, which initially applauded King & Spalding for the DOMA work, launched a campaign against the firm. “We’re There Until You Need Us” asks supporters to tell the law firm “that they have made a terrible decision.” Olens, in his speech on Wednesday, said he agreed with Clement’s statement that, "Defending unpopular positions is what lawyers do... Efforts to delegitimize any representation for one side of a legal controversy are a profound threat to the rule of law." A spokesperson for Olens said Friday that the attorney general had no additional comments on the issue. About half of his 18-paragraph speech addressed the King & Spalding case:

Throughout the history of our Nation, there have been many examples of principled lawyers who have stood with their client, just as President Adams did, amidst much public outcry. As I was preparing these remarks, many important cases came to mind, but just last week, a case involving an Atlanta firm received national attention. Paul Clement, formerly of King & Spalding, was hired by U.S. House Republicans to defend the Defense of Marriage Act after the Obama Administration and Attorney General Holder declared they would no longer defend the Constitutionality of the Act. After a few days of intense public outcry, King & Spalding withdrew from representation. Clement resigned from King & Spalding and joined another law firm - Bancroft Associates - where he will continue to represent his client. The subject matter of the case is irrelevant - it could just as well have been a death penalty case for a heinous murder. In keeping his commitment to his client, Clement carried on the tradition of Adams - that in order for the rule of law to work, attorneys must take on unpopular clients. And once an attorney has agreed to represent a client, he or she must fulfill that commitment regardless of public scrutiny or pressure. In our legal system, every client has the right to hire the best possible representation available to him or her. Mr. Clement accurately stated, "Defending unpopular positions is what lawyers do... Efforts to delegitimize any representation for one side of a legal controversy are a profound threat to the rule of law." King & Spalding said that lack of proper vetting was the reason for abandoning the case, but abrupt withdrawal of a client because of unpopularity sets a dangerous precedent and could have a chilling effect on law firms. Interestingly enough, this same firm has represented Guantanamo detainees. As referenced by Paul Clement, through the sage advice of former King & Spalding partner Judge Griffin Bell, "You are not required to take every matter that is represented to you, but having assumed a representation, it becomes your duty to finish the representation." Supporters of King & Spalding's decision say that the law firm made the right decision based on morality. However, there is a clear distinction between moral duty and the law, as described by Judge Bill Pryor in his Harvard Journal of Law and Public Policy article on "Moral Duty and the Rule of Law." Robert Bolt highlights the importance of this distinction in his play “A Man for All Seasons.” Character Sir Thomas More, while engaged in an argument with his friend William Roper affirms, "The law, Roper, the law. I know what's legal, not what's right. And, I'll stick to what's legal." It is the role of our legal system to enforce the law as it stands, regardless of its morality. An immoral law can only be changed through the political process, Citizens can influence that political process by supporting candidates whose views align with one's sense of morality. Martin Luther King, Jr. understood this concept. Although segregation is morally wrong, he distinguished unjust defiance from just civil disobedience. He wrote: "In no sense do I advocate evading or defying the law, as would the rabid segregationist. That would lead to anarchy. One who breaks an unjust law must do so openly, lovingly and with a willingness to accept the penalty. I submit that an individual who breaks the law that conscience tells him is unjust, and who willingly accepts the penalty of imprisonment in order to arouse the conscience of the community over its injustice, is in reality expressing the highest respect for the law." Eventually, through the political process, Martin Luther King, Jr. and other leaders of the civil rights movement, were successful in changing the unjust law. Although lawyers were banned in the original colony of Georgia, we have played a proud and vital role in our State's growth, based on the rule of law. Our first lawyer was William Clifton, the Attorney General. In fact, our State was a pioneer in establishing one of the fundamental rights we enjoy today as Americans - the Writ of Habeas Corpus. Georgia was the first state to incorporate this right in our State Constitution, and it was not suspended during the Civil War. We must embrace the great legacy President Adams has left us - the fundamental principle of the rule of law and the right of all clients to effective representation- As lawyers, we owe a big debt of gratitude to our second President. And, I owe a big debt of gratitude to you for your friendship and the blessing to serve as your Attorney General.