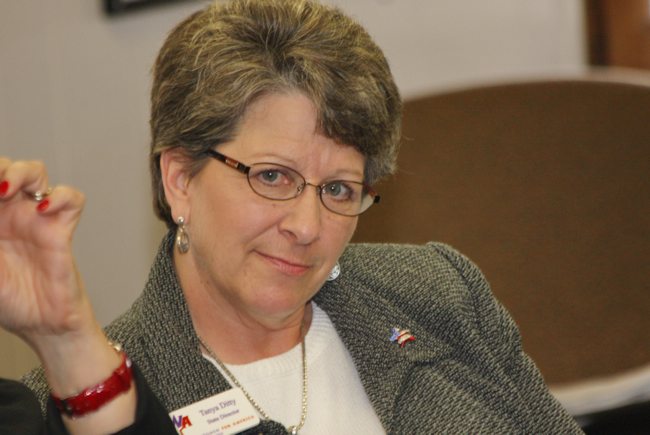 Not one to leave the gays alone to enjoy their days in the Supreme Court this week, Georgia’s gay marriage bigots crawled out from under their anti-gay rocks to take another victory lap and give the finger to LGBT activists. How sweet.

But at least the Hater-in-Chief, Tanya Ditty (photo), admitted that even marriage equality supporters are people, too.

“This is not an easy issue because you are dealing with real, live human beings,” said Tanya Ditty, head of Georgia Concerned Women for America.

Ditty made her claim to anti-gay fame during a legislative hearing for an LGBT employment bill last year. Her testimony went viral, though it ultimately won the day. Ditty is among a handful of marriage bigots and LGBT activists included in an Atlanta Journal-Constitution piece looking back at the 2004 battle over a successful effort to add a gay marriage ban in the Georgia Constitution.

Ditty goes on to question the accuracy of polls showing changing public attitudes on gay marriage. Of course she does, missing the point that one day she’ll be firmly planted on the wrong side of history with Georgia’s other anti-gay activists including Randy Mickler, Rinda Wilson, Judy Manning and Sue Ella Deadwyler.

Ditty is skeptical that national opinion has swung as far as polls suggest, but doesn’t doubt that younger Americans are more likely to support same-sex marriage. “The media has done a very good job normalizing the lifestyle through TV, through video, through music,” she said. “It surrounds them.”

Ditty’s not alone. Other architects of the 2004 ban still support it.

Former Republican State Sen. Mike Crotts, who sponsored the bill that set up the constitutional referendum, remains opposed to same-sex marriage. “From my point of view, (growing support) shows the moral decay of what is happening in our country,” he said.

And there’s Sadie Fields, who nearly single-handedly pushed the marriage ban through the Gold Dome.

There you go. Sadie Fields, spokesperson for God and anti-gay haters everywhere.