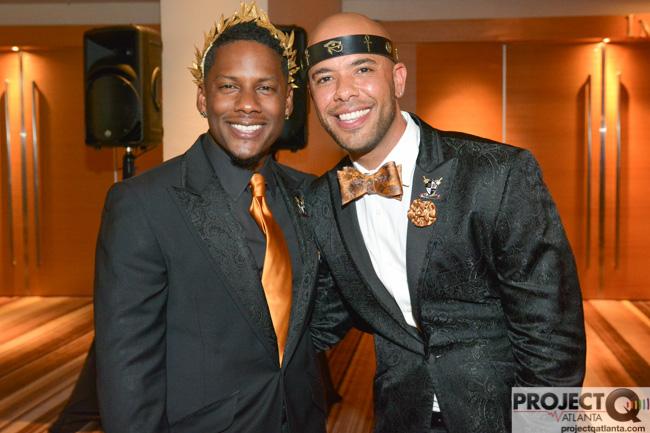 A gay-owned restaurant that celebrates the Gullah-Geechee culture is coming to downtown College Park in late spring.

Virgil’s Gullah Kitchen & Bar is the brainchild of Juan and Gee Smalls, co-founders of The Gentlemen’s Foundation. The non-profit is best known for The Gentlemen’s Ball, an annual fundraiser that celebrates black LGBTQ people in Atlanta.

The couple, who are first-time restaurant owners, scouted locations for 18 months before finding the right spot in College Park. They are keeping the exact address under wraps for now.

“We’re just really excited to bring this to the community,” Gee Smalls (photo, right) told Project Q Atlanta. “Everything has been falling into place, so it hasn’t been a stressful process once we got the location settled on.”

Renovations on the 2,000-square-foot space started in March.

“We had to do a complete build out,” Smalls said. “We had to build the kitchen and everything. It used to be a speakeasy, like an underground place where you had drinks, but no food or anything like that.”

There will be exposed brick and columns throughout the restaurant, Smalls said.

“We’ll be able to seat about 80-90 people, but we also have a standing room area where people can have drinks and socialize so they don’t just have to come to eat,” he said. “The front part of the building in front of the bar will be a communal area where there will be tables for people to commune and hang out.”

The restaurant is named after Gee Smalls’ father, who died shortly before Juan and Gee met.

“I’m a very spiritual person and he’s been really guiding me and my steps since his passing, even bringing me and Juan together 11 years ago,” Smalls said. “He has guided our community work and business ventures.”

The couple will model the restaurant on Virgil Smalls’ Gullah-Geechee culture, which is most common among African Americans who live in the Lowcountry region of Georgia and South Carolina.

“It just made sense to put all [Virgil’s] favorite recipes in there and celebrate him and all he’s done for our lives,” Smalls said.

That culture will be reflected in the food and décor, Smalls said. The menu will be heavy on seafood and rice dishes, plus there will be a full bar and signature cocktail menu.

“One thing about Gullah-Geechee culture is we are really loving and accepting people,” Smalls said. “That’s the one thing that’s going to lead the restaurant is just acceptance and love for everybody.”

Get a sneak peek at Virgil's in the Instagram video below.