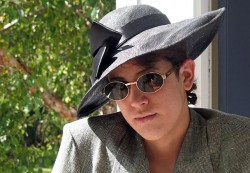 Spark a little controversy in Cobb County over gender norms, hit New York City for a talk show and then skip town for Miami. It’s been a busy couple of weeks for Jonathan Escobar.

He’s been ensnared in very public debate with administrators at North Cobb High School over his desire to wear women’s clothing. He says a school administrator told him to dress more “manly,” while the school system asserts he ran afoul of its dress code.

The case, which surfaced in media reports earlier this month, has continued to attract attention. Escobar, meanwhile, has dropped out of school while a Facebook page supporting him has jumped to nearly 9,400 members.

Escobar faced negative reactions from commentators at the Marietta Daily Journal, Neal Boortz and other sources who called Escobar’s actions fame seeking. Escobar also posted a YouTube video where he made sexual comments about another student. The YouTube video has since been deleted.

“I think if we would have gone in there and made it all about Jonathan and then there was this YouTube video of him, then that would have made things more difficult,” [Maru Gonzalez of the Georgia Safe Schools Coalition] said today.

Escobar posted several videos on YouTube, including one posted on Oct. 18, where Escobar says he “doesn’t have a contract with Disney” and therefore doesn’t have always be polite. At one point Escobar appears to receive a text message and tells the camera, “That was your boyfriend, he said he wants to suck my asshole,” and, “Hopefully you aren’t so stupid as most of you appear to be.”

Escobar said on the YouTube video most of his behavior was sarcastic, and that it shouldn’t be taken seriously because he is a sweet person. He also posted videos about his trip to New York to appear on “The Tyra Banks Show.” That segment has not yet been promoted on the show’s website.