“Gen Silent” looks at six subjects in the Boston area and examines what specialists are calling something of an epidemic – elderly gay, lesbian, bisexual and transgender people going back into the closet over concerns about their health care.

While the film does put human faces on the anxiety many elderly people experience over possible discrimination and neglect from their caregivers, it also shows the growing number of caregivers receiving training specifically for LGBT elders at a time when they need it the most. 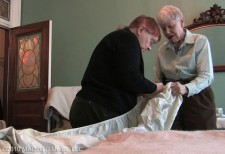 The film won a Best Documentary Award at the 2011 Frameline International Film Festival in San Francisco and has played around the globe. Making its Atlanta debut, “Gen Silent” is the third documentary for the San Francisco-based filmmaker Maddux, who labels this his most ambitious project to date.

The first two people Maddux chose for the film were Lawrence Johnson and Alexandre Rheume (top photo), an interracial male couple with more than a 20-year age difference. Also in the feature are lesbian couple Shari Barden and Lois Johnson (bottom photo), Mel Simms – who was closeted for almost 40 years – and KrysAnne Hembrough, a 59-year-old transgender woman dealing with a terminal illness.

According to Maddux, there are approximately 38 million LGBT Americans over the age of 65, equalling 12.6 percent of the population. That number is expected to double by the year 2030. That means it could and will be you soon enough. To make matters even more pressing, 80 percent of LGBT elders say that they don’t trust the current health care system.

The screening of “Gen Silent” is presented by the Atlanta chapter of Services & Advocacy for GLBT Elders (SAGE), the country’s largest and oldest organization dedicated to improving the lives of lesbian, gay, bisexual and transgender older adults. The local showing of the film is presented through a collaborative effort with The Health Initiative, the Lloyd E. Russell Foundation, Morehouse School of Medicine and Out On Film.