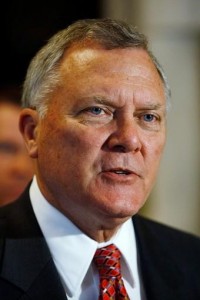 Bring on the boycott! The threats of snubbing Georgia over its newly-minted immigration law aren’t persuading Gov. Nathan Deal from signing it. So prepare the placards, put batteries in the bullhorns and let’s get ready to rumble.

LGBT activists that are part of a board coalition against the legislation wasted no time criticizing the passage of House Bill 87, which took place Thursday and will soon bring to the state the same Arizona-style immigration law that resulted in court challenges and national mockery.

“We are sadly disappointed and outraged that the State of Georgia has chosen to stand on the side Politicians like Matt Ramsey who seek to gain political advantage by encouraging hatred and bigotry. The thousands of people in Georgia who have opposed codifying and legislating hate will not rest until the Governor is accountable to the fact his party has forced its political agenda at our expense, and at the expense of poor and working class immigrant people, and gay, lesbian, bisexual and transgender immigrants all over Georgia, who will suffer for it. We are calling for a National Boycott of conventions and vacation travel to Georgia, to tell the Governor that racism, racial profiling and hate are not values we will are willing to underwrite and pay for. We want to send Governor Deal a strong message that he must veto HB-87, and that will not tolerate a Governor who leads Georgia into the troubled waters of a state like Arizona.”?

“Instead of choosing the road of compassion, the Georgia Assembly chose to take one step closer to making Georgia a place that is unwelcoming and inhospitable to our neighbors. If this legislation becomes law in our state, people of mercy – those who offer shelter and compassion to undocumented immigrants among us – will be considered criminals,” says Reverend Glenna Shepherd, senior pastor at Decatur United Church of Christ. “Programs in our houses of worship will no longer be sanctuary for those in need. Provisions in these bills dismantle the sanctuary movement, making churches and community organizations, as well as their many volunteers, vulnerable to criminal and civil prosecution.”?

Even Jerry Gonzalez, the gay executive director of the Georgia Association of Latin Elected Officials, took to his Facebook page to ask supporters to call Deal (photo) and voice their opposition to the legislation. And if you think he’s not serious about this, Gonzalez confronted state Sen. Renee Unterman, a Republican, at the State Capitol about some offensive comments she made to local media outlets about the issue. Her response? She complained to police.

On Thursday, Gonzalez made a pitch to us on why gay Georgians should care about immigration.

The legislation passed the Gold Dome late Thursday. Since, there’s been no response from the National Gay & Lesbian Task Force. The group voiced its opposition to the immigration legislation on April 7 and threatened Deal with pulling its planned 2013 conference from Atlanta if he didn’t put a stop to it. We criticized their boycott threat the same day, only to be, in turn, criticized by some of you for failing to “unpack how this legislation would affect gay people.” Well, that was one of the nicer comments, anyway.