Two buses and one brief yet poignant reminder of the fight for LGBT equality. That was the scene on a sunny Monday afternoon at the State Capitol in downtown Atlanta. 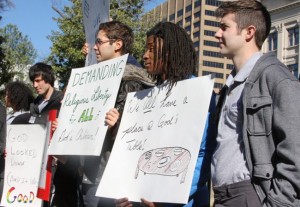 On the steps of the Gold Dome were about two-dozen supporters of Rick Santorum, the most vocally anti-gay candidate of the GOP presidential hopefuls. It was a rally for the Rick Bus, a tour by several conservative and anti-gay female supporters of Santorum. On a nearby sidewalk? About two-dozen LGBT activists from GetEqual GA and Queer Justice League staging a quiet counter demonstration. Their numbers were bolstered by the arrival of another bus – the Soulforce Equality Tour that’s spending the week in Georgia. In between the two sides? About a dozen state troopers and Capitol police, who took action as the Soulforce activists began to sing as they departed. Several police officers escorted the group from the sidewalk and back to their bus (video), which was parked next to the Rick Bus across the street.