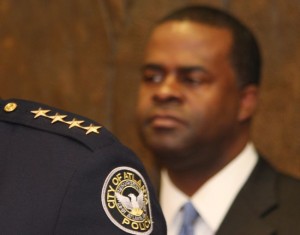 Let’s do the math: 10,000 people show up for a movie in Piedmont Park and there’s no on-duty cops. A few hundred gays gather for a protest and scores of police in paramilitary gear are there.

What’s wrong with this picture?

Bedlam forced an early closing of “Screen on the Green” on Thursday as groups of teens fought, harassed movie-goers hoping to enjoy “Transformers: Revenge of the Fallen,” and caused disruptions that ranged from punched faces to an alleged hate crime and gunfire.

Where was the Atlanta Police Department? Two-dozen off-duty officers were apparently on hand, along with a private security detail provided by sponsor Peachtree TV. Ironically, agency brass, along with Mayor Kasim Reed, were a few blocks south at the Atlanta Civic Center wrapping up a meet-and-greet with the top three candidates for police chief.

A few weeks earlier, when hundreds of gay and pro-gay supporters showed up at the Charles Allen entrance to the park to counter an anti-gay protest, dozens of police officers were on hand — though not the agency’s LGBT liaison — along with at least three top commanders of the agency and the same Red Dog Unit that raided the Eagle last September. They were the guys in the paramilitary gear (bottom photo).

Not a punch was thrown.

Reed (top photo, background), at the public forum for the top cop candidates on Thursday, admitted that some people argue that the police department has breached the public’s trust. Is it any wonder why?

Back to “Screen on the Green”: The police scrambled Friday to explain the mess at the public event the night before, promising to investigate what happened – they said the same thing eight months ago after the Eagle raid and that probe isn’t done yet – and put more cops in the park for the event.

Interestingly, “Dreamgirls” is on tap next. (Now it seems organizers are pushing it back a week to June 17.) Expect a large police presence for a movie that will draw a large gay audience.

How does this keep happening?

Alex Wan, the gay City Council rep whose district includes the Eagle and the park, told the Atlanta-Journal Constitution that the blame for the ruckus falls on some unruly teens.

“Unfortunately, we just came off a hugely successful Jazz Festival, where we had more people and we had no incidents at all,” Wan said. “I am hoping this is a one-time incident. I hope we can make a few adjustments and come back to having great events in the part of town, because it is so popular with the neighborhood and the city.” 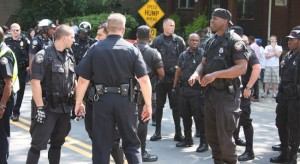 The AJC jumped on the “Screen” story Friday, as they should have done. The paper’s reporting included several first-hand accounts from people in the middle of the mess. One of those was from a 26-year-old Newnan man who says he and his companions were attacked. He called it a “hate crime.” The paper didn’t challenge the assertion, nor provide proof that the attack was motivated by any sort of racial, gender or sexual orientation bias.

That’s a serious allegation to toss around so flippantly.

The GA Voice did what the AJC should have: They asked a police spokesperson about the allegation.

Sgt. Curtis Davenport, public information officer for the APD, said he has looked through numerous reports from last night and said nothing in the reports stated anything about a hate crime against anyone, including gay people, at the park.

“This is the first I’m hearing about it,” he said. “I have not heard anything about that and nothing is mentioned in any of the reports.”

Whether it was a hate crime or not, other gay movie-goers had more criticism to heap on organizers and police. Jesse Rhodes, a gay man who attended the movie with friends, created a Facebook page to “Take Back Screen on the Green.”

It’s time to stand up as a community and boycott Screen on the Green. This past thursday’s event was full of hatred, and unlawful people. Midtown is home to a proud, and diversified group of people who already fight social prejudice, we don’t need to invite it into our own backyards.

Screening “Dreamgirls” will surely help motivate the gays to come out in force.