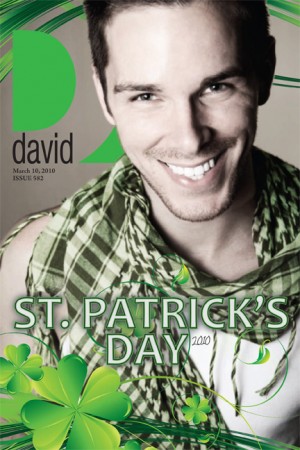 Just nine days after picking up the assets of Southern Voice and David magazine in bankruptcy court, the owners of Gaydar magazine hit the streets with a re-branded nightlife glossy.

No longer is there Gaydar magazine, which was published recently by the reorganized Gaydar Magazine, LLC and last hit the streets on March 3. Now it’s David Atlanta, thank you very much, picking up with Issue 582 – the next in line after the magazine stopped publishing in November when its parent company, Window Media, collapsed and filed for bankruptcy.

In fact, the last issue of David – 581 – was set for release on Nov. 29 but never made it to print. Former staffers recovered the files and published it to the magazine’s former Facebook page.

Fast forward more than three months and the reconstituted David hits the streets with a March 10 publication date, a timely St. Patrick’s Day theme and cute David-caliber cover model. Interestingly, there’s no mention of the pub’s new owner being Gaydar in its staff box or any mention of the transition, either.

The 64-page magazine has a look and feel similar to the David of past and includes lots of photo pages. Also in the inaugural issue is an interview with Stasha Sanchez, who talks about last week’s Miss Georgia USofA pageant, a spotlight on Kristine W., a brief profile of Yuke from the Atlanta Eagle and a quick chat with DJ Chris Griswold, even if it was already published in the March 3 issue of Gaydar.

What’s missing are some of the more popular features of the former David, such as Bitch Session and columnists including Topher Payne and Michael Jeffrey. (Need Wood? also isn’t in the mag, since you can find it right here on Project Q.)

The Gaydar website remains operational, though it’s a skeleton of a site that includes the cover of the new David and a post from Gaydar co-owner Matt Neumann.

On February 25th, 2010 Gaydar Magazine Inc. acquired the remaining assets of and rights to David & SOVO in an auction at The Federal Bankruptcy Court in Atlanta. These assets include the remaining office contents at 1075 Zonolite Road as well as websites, logos, trademarks, distribution lists, racks and boxes as well as the archives of David and SOVO.

The archives have been donated to the history center, office contents sold and donated, and the websites and brands will be re-launched. First with David on 3-11-10 and SOVO in late March or Early April. We are taking our time in these re-launches to ensure products worthy of the brands.

Gaydar has served the Atlanta GLBT community for over a year and the decision to re-brand as David was well thought out. We asked customers and readers alike for their thoughts on a name change and an overwhelming number thought it a good idea and we agree.

The brands David and SOVO have long been a staple and standard for GLBT publications nation wide. Both have historic and yes commercial significance to this market. So the name change was both sentimental as well as a business decision.

I welcome your thoughts, suggestions and comments after the re-launch hope you enjoy the publications and appreciate the work and effort by Gaydar to bring back to GLBT Atlanta a much loved institution.

The David site is operational again, but only includes the David and Southern Voice logos with the David cover and a promise that it will be re-launched in one week.

Gaydar picked up the assets of David and SoVo for $9,000 as the names and assets of former Window Media publications were auctioned off in bankruptcy court. Gaydar’s bid topped one from Georgia Voice, a company created by former Southern Voice and David employees after Window’s closing.

Neumann closed the purchase March 1 as the company also worked to settle a $40,000 lawsuit from a Marietta publisher who says Gaydar owes it for publications printed last October and November.

Gaydar is also facing a hurdle related to Pearl Day, an event last September at Six Flags that suffered financial hits after underwhelming crowds showed up for the event. Pearl Day pledged at least $9,000 to three non-profits – the Atlanta Pride Committee, CHRIS Kids and Pets Are Loving Support – but has failed to pay the organizations. It also owes vendors that it worked with on the event.

Pearl Day’s two owners who live in Georgia now work for Gaydar Magazine, LLC. The three beneficiaries say Pearl Day organizers have left behind a string of broken promises and unfulfilled financial pledges. They add that the experience has left them frustrated over the lack of funds and communication with organizers since the event last September and hesitant to work with Gaydar now that it hired the two men, one as the senior financial executive.

Pearl Day has said it’s still working to pay its beneficiaries and vendors.