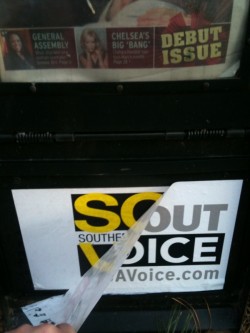 The new owners of Southern Voice and David magazine fired a shot at the GA Voice on Friday, issuing a cease and desist letter that accuses the new LGBT publication of wrongly using the SoVo name.

The six-page letter from Scott M. Herrmann, an attorney for Gaydar Magazine LLC, accuses the GA Voice of representing itself as SoVo in public and as it sells advertising, using a URL that includes the SoVo name, and repurposing SoVo distribution boxes as its own. The letter demands that the GA Voice stop the actions and threatens to seek steep financial penalties.

“As my damage assessment is continuing, I will be in touch about the financial injuries you have caused,” Hermann writes in the letter. “In the meantime, stop posing as Southern Voice.”

The letter was sent to the GA Voice on Friday, the same day the company’s first issue hit the streets. The cease and desist letter was first reported late Friday by Xanna Don’t on her blog, Don’t Label It.

The accusations by the new publisher of David — which returned on March 10 — and SoVo — which is scheduled to appear on April 7 — open a new and contentious chapter in gay Atlanta’s media landscape. Window Media, formerly the nation’s largest LGBT newspaper publisher and parent of SoVo and David, collapsed last November and filed for bankruptcy. The move shuttered publications in three cities and set off a scramble in Atlanta among potential successors to David and SoVo.

Several former SoVo staffers, including its former editor Laura Douglas-Brown and co-founder Chris Cash, worked to create the GA Voice. In doing so, Hermann alleges in the cease and desist letter, they used savesovo.com and the former paper’s Facebook page to solicit funds and promote the new company. Gaydar, in a surprise move, outbid the GA Voice for the assets of Southern Voice and David during a bankruptcy hearing on Feb. 25. The purchase closed four days later.

“You also deceived and defrauded the public in maintaining the Facebook web account for Southern Voice well after Southern Voice closed its doors and Gaydar purchased the company,” Hermann writes. “You are illegally publishing information intended to confuse the public that you are or represent Southern Voice.”

Hermann also notes that savesovo.com points traffic to the GA Voice website, something he says cannot legally be done. He criticizes the new company for using the SoVo name to raise funds for the GA Voice and warned of potential civil and criminal penalties.

“As you have been in the publishing industry for many years, I am sure that you know what you are doing is completely improper and illegal,” Hermann writes.

Douglas-Brown says that the company is discussing the allegations with its attorney, but that the GA Voice has been “absolutely clear about who we are” since its creation.

“We’re discussing this with our attorney about whether we need to respond more formally, but I can unequivocally say that the GA Voice has always been absolutely clear about who we are,” Douglas-Brown says. “From day one, the beginning of our fundraising, to our community meeting and ever since then.

Hermann’s letter also accuses the GA Voice of misappropriating SoVo distribution boxes and filling them with the March 19 issue of the new paper. He included a photo (top) of what appears to be a former SoVo box with copies of the GA Voice inside and GA Voice sticker covering the SoVo logo.

Douglas-Brown says the GA Voice placed its own green distribution boxes around Atlanta for the paper. But she adds that the company outsourced its distribution and is investigating the allegation that SoVo boxes were used for the GA Voice.

“We take that allegation really seriously. We distributed our own boxes, but outsourced distribution of the newspaper. We are currently investigating to see if for any reason that was done. If anybody did, it was certainly not acting on instructions from us,” Douglas-Brown says.

Ironically, the Atlanta Free Press – a Gaydar publication that struggled with staffing before it ceased printing in December – used SoVo boxes for distribution before the company purchased the assets of the former newspaper.

The heightened tensions between the two publications come as Gaydar shuffled its corporate ownership prior to its purchase of the SoVo and David assets and rebranded its flagship Gaydar as David earlier this month. The second issue hit the streets Wednesday at 72 pages, up eight pages from its debut a week earlier. 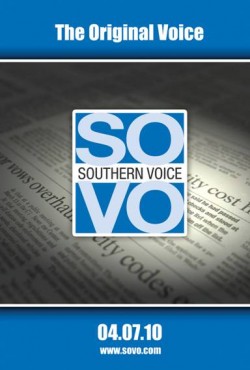 Gaydar also faces a $34,000 settlement of a lawsuit from a Marietta publisher who alleged that the company didn’t pay several outstanding printing bills from October and November. The company struck an agreement with Page Enterprises to pay off the debt in three equal payments on April 2, 16 and 30.

Gaydar was also criticized by three non-profits after hiring the two Atlanta-based co-owners of Pearl Day, an event that promised $9,000 to the groups but has yet to make the donations. With the outstanding debt, the Atlanta Pride Committee and Pets Are Loving Support have said they won’t do business with Gaydar now that it employs the two Pearl Day owners. The third charity, CHRIS Kids, says it will “be very careful in our dealings” with the publishing company.

Pearl Day has said it’s working to pay the non-profits and other vendors that are owed money from the event, held Sept. 11 at Six Flags.

Shortly after Gaydar purchased the SoVo and David assets, Neumann said in an interview that he hoped to launch the newspaper in late March. But that date now appears to be set for early April. According to sovo.com and ad in the March 19 issue of David, “The Original Voice” will publish on April 7.

During the interview, Neumann said he wasn’t in a race with the GA Voice.

“Anything worthwhile is worth waiting for,” Neumann said. “We are gong to get David out for a couple of weeks and get it up to standard and then proceed with SoVo. “I am not in race with the GA Voice.”

Neumann also said that the print archives of SoVo were donated to the Atlanta History Center shortly after the purchase of the papers closed.