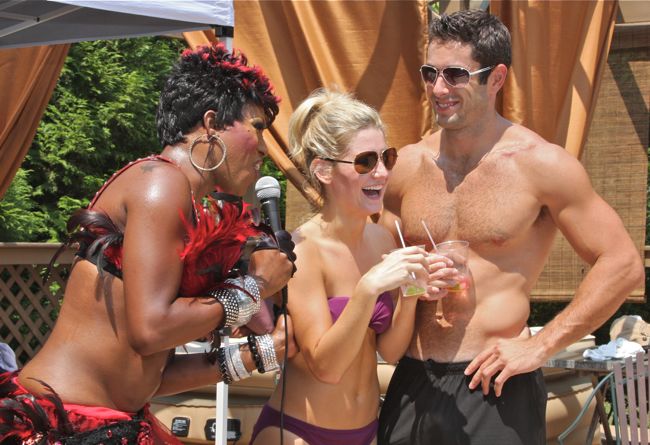 Their inner divas tucked away until the start of their next season, the Atlanta Gay Men’s Chorus went poolside on Saturday for a fundraiser complete with music, a little drag and plenty of abs and cocktails.

“Get Bronzed Pool Party & Fundraiser” took over a tony Buckhead residence for the AGMC’s inaugural attempt at what they hope becomes an annual attraction and fundraiser for the non-profit. The afternoon included music from DJ Travis Roache, drag with an edge from Angelica D’Paige (top photo), a few dancers from Swinging Richards and plenty of cocktails and noshes.

The chorus is cranking up its fundraising and in May, launched its Supper Club to raise funds for it and a non-profit.

In April, they channeled their inner “Divas” and later, the chorus’ Panache took to Cannon Chapel at Emory University. The chorus closed its 30th season with “Thirty Years of Broadway” in early July at the Rialto Center for the Arts.

And let’s not forget the always memorable big hair fundraiser Big Wig, which filled a gallery space in March with a collection of wigs and costumes that grows more audacious each year.