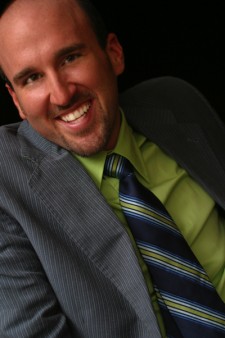 As Horizon Theatre preps the return of its award-winning “Avenue Q” production on Friday, we get personal with a local gay cast member on why the show is so much more than “’Sesame Street’ for grownups.”

If you haven’t seen “Avenue Q” or even if you already know the joys of its sex, sass and savvy, Atlanta actor Shane Desmond (photo) says that you need to see how deeply the Horizon production can envelop an audience with touching results hidden amidst the musical’s raunch and razzle-dazzle.

For the uninitiated, actors with puppets and gay-inclusive themes are just the beginning. “Avenue Q” is the only address you can afford when you’re fresh out of college, out of a job, or just trying to find your way in life.

Desmond, who steps into three roles in the show that wowed Atlanta last year, shares his thoughts about hot puppet sex, why he and his partner personally relate to the show’s message about enjoying life despite hardships, and pressing for change in gay Atlanta.

So what is it about “Avenue Q”? Why does it consistently resonate with LGBT audiences?
Princeton says near the beginning of the show “this is real life,” which is a tough pill to swallow, what with all the puppets and DayGlo. But by the end, it’s incredible just how many corners of our lives this show manages to explore.

In its own snarky, sassy, offensive way, the show manages to deal with one-night stands, our closeted friend, racism, finding our place in the world, and at the center of it is this quirky, dysfunctional, community of characters. I think LGBT audiences can relate to that sense of community, of building a surrogate family to help make the pains of life a little easier to bear.

What are the driving forces behind your characters, and are they anything like you in real life?
Of the three roles I play, Nicky is the most integral to the story. Speaking in “Sesame Street” terms, he’s the “Ernie” character: charming and lovable, but a total slob and really lacking any sort of goal in his life. He lives in the moment: He’s that friend we all have who probably works a different job every time you see him, and makes just enough money to buy beer and video games. I definitely had a few years when I lived in NYC where I was like that – just scraping by, not really pushing myself, but incredibly happy nonetheless.

What makes this production special?
Upon entering the theater, you really feel like you are part of the show. The set just sort of envelops you and makes you feel a part of the show. It’s a great, intimate space, with truly not a bad seat in the house.

And it’s a show that’s meant to be small and intimate – it gets swallowed alive in a space like the Fox, but at Horizon, it’s perfect. You can see every expression on the actors’ faces, and it gives you a true appreciation for the artistry of manipulating the puppets. If you’ve seen “Avenue Q” on Broadway or on tour, you really haven’t seen “Avenue Q.”

If audiences could walk away from the show with one message, what would it be?
Puppet sex is hot? No. Umm… there are a lot of messages wrapped up in the raunch and the laughs, but I think the big one is: Growing up is really fucking hard, but you only get one life, so enjoy it. That might not fit on a fortune cookie, but I think it sums it up.

Can you relate?
I married my partner in Massachusetts just last month. Last year was horrendous for us: He suffered a traumatic brain injury in March and went through brain surgery and all that. While “Avenue Q” was rehearsing and performing the first time around, I was holding my man’s hand in the ICU and all through rehab. He’s miraculously back to his life with no real changes, apart-from some bad-ass scars. And now we’re married, and incredibly happy, and we appreciate every single moment we have together. So the message of the show definitely rings true for us.

What are your thoughts on the state of gay Atlanta? What would you change, and what wouldn’t you change for the world?
It’s hard to get married in Massachusetts and then come back to Georgia to realize we don’t have those rights here. I’m grateful for Atlanta, because it’s sort of a haven for a lot of people whose lives were much worse elsewhere, but I think we have a long way to go. I don’t think it’s enough to just be left alone – I think we need to fight for full rights. More of us need to get off our asses and work to make some change.

Anything else you’d like to share with our readers before they head to the theater?
I’ll be stepping into a role that was created by another actor, the brilliant Jeff McKerley, and joining a production that was a tremendous bonding experience for its cast the first time around. And it’s no coincidence that the show, which is so much about loving the people in our community, has a cast that has been incredibly warm, loving, and welcoming of me. I think the audience will feel that same love that the cast shares, and hopefully pay it forward themselves!