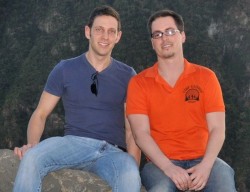 Two gay men from Atlanta and another from South Carolina were attacked and robbed at gunpoint last week as they vacationed with friends in a Caribbean getaway known for its “widespread discrimination” based on sexual orientation.

The two Atlanta men — Michael Baker, advancement director for HIV non-profit Positive Impact; and freelance writer Todd Wiggins, who is a founder of the AIDS Vaccine 200 – described the attack in explicit detail in Internet postings. The men were attacked as they readied for dinner in a one-room mountain-top cottage Wiggins had rented in St. Lucia. Baker was on the trip with boyfriend Nick Smith. Tom Richman, Wiggins’ partner, was away in Seattle on business at the time of the attack.

Wiggins wrote Monday that four men were arrested in connection with the attack, but were later released. 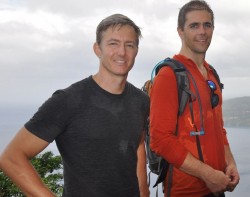 Wiggins recounted the incident in a post to his travel blog, describing the attack as beign motivated in part by anti-gay hatred.

They were naked and lying face down on the floor. Michael was bleeding. Their feet were bound, and their hands were tied behind their backs. One of the men picked up one of my running shoes and held it next to my face and pointed at it. I could see a grin in his partially concealed expression. This was the second time that I felt I was being recognized or that this person must know me. The violent man began questioning Michael and Nick. “Are you gay? Why were you naked together in the shower? I hate fucking faggots. It makes me so angry, I should kill you. Fucking faggots!” We denied the accusation. No, we’re not gay. No, no, we’re not gay.

Baker described the attack on his Facbeook page, thanking friends for the outpouring of support in the wake of the attack. He also said the incident was more than a simple robbery.

They began to kick me in the back and the side. I was on my side, looking at Nick’s face. I could feel warm water running down my back, and realized it was not water, it was blood. I saw the blood flowing out of my forearm. They began to tell us that they hated White people. They hated faggots. They asked where we were from. We told them the United States. They told us again how much they hated us. They asked if we were gay. Why had we showered together? Todd and I both said it was because the water heater was so small. They said if we were faggots they would kill us. I saw my penis lying on my belly, and I thought they would cut it off and probably Nick’s, too. I pulled my legs up in a fetal position and clamped my thighs down on my penis, pulling it back to hide it from them so maybe they wouldn’t cut it off. Then I saw the lead guy kick Nick in his face. I heard the scream. I thought they broke his nose, or worse. His whole body collapsed on the floor, and the same guy kicked him in the stomach. I heard him scream again.