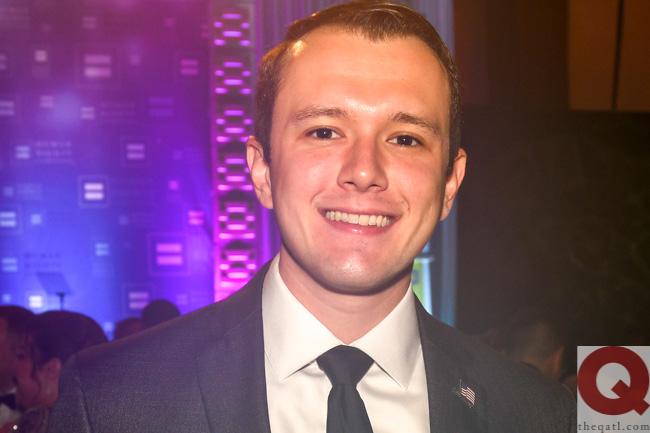 Political newcomer Mac Sims wants to become the next openly LGBTQ member of the Georgia legislature.

The 23-year-old West Point graduate and U.S. Army veteran got the political bug after working on Stacey Abrams' campaign for Georgia governor in 2018.

“That was how I got my feet wet in Georgia politics and discovered that I really loved it,” Sims (photo) told Project Q Atlanta. “I loved the issues-based advocacy and figuring out what we can do to make people’s lives better in Georgia.”

Sims hopes to unseat state Rep. J. Craig Gordon in House District 163, which includes Savannah. Gordon, a Democrat in his seventh term, has not said if he'll run again. He did not respond when asked by Project Q about his plans.

But if Gordon does run again, Sims plans on taking him on in the 2020 primary.

“I know him well, he’s a good guy, but at the end of the day I’m philosophically opposed to 14-year incumbents,” Sims said.

He also disagreed with Gordon’s support for Opportunity School Districts, which give the state the authority to seize control of failing schools.

Sims was born and raised in Gainesville, Ga., and attended the U.S. Military Academy in West Point, N.Y. He became close with Patrick Murphy, Under Secretary of the Army, during his time there. Murphy was a leader in the effort to repeal the military’s “Don’t Ask, Don’t Tell” policy in 2010 while serving as a U.S. House member in Pennsylvania.

“It was a full circle moment where the person who made it possible for me to go to West Point became a mentor of mine,” Sims said.

He was active in the school’s gay-straight alliance despite initial reservations.

“I was hesitant to get involved, but I came out at the end of my freshman year because I decided that looking around me that West Point was not the conservative institution I thought it was,” he said. “At the end of the day it was a college with 18- to 25-year-olds and they were all really accepting.”

Sims credits the GSA with being a big part of his development as a cadet and an officer in the Army.

He did advance work for Abrams’ campaign while on leave after graduation. Then he was assigned to Fort Stewart, about 40 miles southwest of Savannah.

Sims’ military career was cut short after doctors discovered a congenital heart issue that went undiscovered in prior medical screenings.

Sims was “shocked and dismayed” by Gov. Brian Kemp’s win over Abrams.

“That really motivated me, watching that happen and trying to figure out how this happened and how this could have been prevented,” he said.

Sims moved to Savannah with his partner in early 2018 and set his sights on a political run. He listed education, justice reform and economic development as his core campaign issues.

But he also looks forward to fighting for LGBTQ rights if elected. While critics of anti-LGBTQ “religious freedom” bills argue the legislation is bad for Georgia’s economy, Sims said it goes beyond that.

“At the end of the day, we shouldn’t be looking at this from a business perspective,” he said. “It’s a moral issue. Morally it’s the wrong thing to do.”

He called Georgia “a low-equality state.”

“Conversion therapy is still legal in Georgia and that’s a horrific stain on our state. We don’t protect the rights of transgender people in our state. That’s a stain on our state,” he said. “You can still be fired in this state for being gay. Despite the fact that the House and House Republicans were willing to pass a hate crimes bill, the Senate wasn’t willing to take it up. These are all stains on the moral fabric of our state.”

Sims is going to Georgia Equality's Evening for Equality gala dinner on June 15 in Atlanta. Gay Atlanta's own Paul Horning, Toby Bryan and Colin Wright host a fundraiser for Sims the following day.

The Democratic primary for House District 163 is in May. The general election is in November 2020. The Georgia House includes five openly LGBTQ members,who are among the 15 LGBTQ elected officials in Georgia.