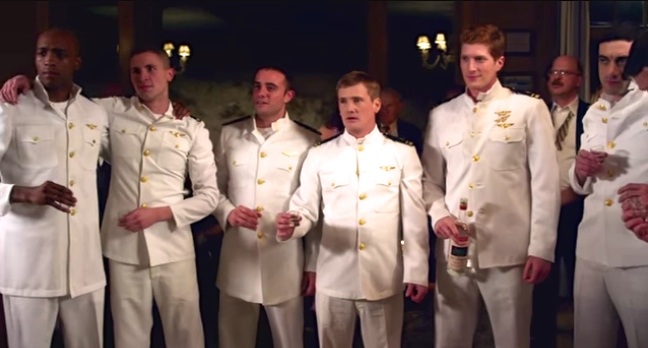 Playwright and director DMW Greer always envisioned his gays-in-the-military play “Burning Blue” as a film, yet he had no idea it would take two decades to make that happen. On Friday, “Burning Blue” hits theaters in 12 markets, and Atlanta is lucky to be one of them. Greer talks to us about getting here.

Set during the Don’t Ask, Don’t Tell era, “Blue” takes place in the aftermath of two fatal aircraft accidents on an aircraft carrier. A government agent is placed aboard the ship to find out what caused the issues and stop any subsequent ones. Things turn sour when a soldier reports seeing one of the top ranking fighter pilots in a gay club.

As a gay man and former Navy airman, Greer didn’t have to do a lot of research.

“I was in the military myself (serving as an aviator) before and during DADT and had many friends there,” he says. “During my time in the military, I was dating women and it wasn’t an issue until the end. But I had friends who were greatly affected, harassed and intimidated, and others who left.”

Written in 1992, “Burning Blue” bowed at the London Fringe Festival three years later before moving to the West End, where it won a few Olivier Awards. Greer adapted it with co-writer Helene Kvale in 2008 – beefing up some of the secondary roles – and started the film version in December 2010.

It’s his first time directing a feature, and he says the last few years have been a great experience. Filming has been a diet of stopping and starting, editing and raising more money. He finished the film just a few months ago, after select screenings here and there over the last year.

His actors – who he didn’t ask about their sexual orientation – were game for the roles. Perhaps the best-known cast member is Tammy Blanchard (“Life With Judy Garland: Me and My Shadows”), who plays one of the wives. Having a good friend who is a casting director certainly helped Greer find his cast.

Like “G.B.F” earlier this year, the film has received an “R” rating, mostly due to the gay content. The filmmaker was a little surprised, hoping it would get a PG-13, but his overriding emotion is satisfaction that the film will be seen.

Greer says that seeing “Burning Blue” reach the mainstream and get a theatrical release is very satisfying, and he hopes it leads to more acceptance of LGBT characters in film.

“Ultimately the goal is – I think this is perhaps many years in the future – that people can see this as a love story, one man being true to themselves without any real emphasis placed on sexual orientation,” he says. “I would love it if that was where we were.”