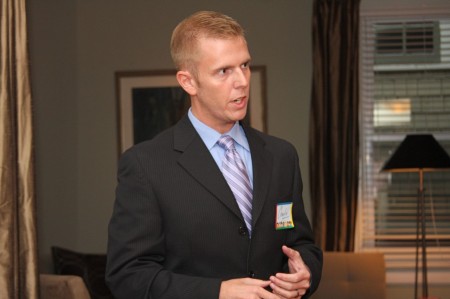 Charlie Stadtlander went to the heart of District 3 on July 30 to formally launch his campaign for the seat on the Atlanta Board of Education. It also happened to be in Midtown, where Stadtlander — a gay elementary school teacher — could muster considerable support from the area’s gay residents.

Stadtlander, 29, wants to unseat incumbent Cecily Harsch-Kinnane and become the only openly gay member of the school board and the only member to come out prior to being elected. Mitzi Bickers, while serving as school board president, came out as a lesbian during her unsuccessful run in 2003 to become chair of the Fulton County Commission. It’s his second campaign this year. In January, he entered the race for the District 6 post on the Atlanta City Council, but ended the campaign in early April.

On Aug. 22, Stadtlander joins a panel discussion on bullying in schools hosted by Parents, Teachers and Advocates, Inc. The workshop, “Bullying: The Truth, the Myths and What We Can Do About It,” runs from 10 a.m. to 3 p.m. at the Human Service Center in Roswell.

View the Project Q Atlanta photo album from the kick off event.