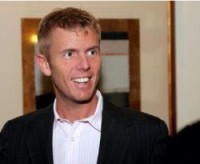 But the two districts encompass many of the same intown neighborhoods and Stadtlander says a key issue in his City Council race – being a good steward of taxpayer dollars – is also a critical component of the school board campaign. Stadtlander is running against at least one other candidate, incumbent Cecily Harsch-Kinnane.

“When I left the city council race, I said I wanted to get back to my passion, which is education,” Stadtlander says. “My reasons for running for school board are similar to why I ran for city council – crime, taxes, human rights. All of those things revert back to education. Policies that affect these start on our school board.”

Stadtlander, like all school board candidates, faces the duel challenge of raising campaign funds during an economic recession and as higher-profile city races are already attracting millions in donations. He left the city council race with nothing in his campaign coffers, having spent all but one cent of the $2,436.24 he raised during the city council campaign.

But Stadtlander says even without a formal announcement about the school board race, the campaign has already raised more than it did for the city council seat.

“Economic times are hard and we all recognize that. I can tell you that we’ve been having fundraising success so far and we haven’t event announced yet. It takes money to run a campaign and I think the community will come behind my candidacy,” he says.

If elected, Stadtlander would become the only openly gay member of the school board and the only member to come out prior to being elected. Mitzi Bickers, while serving as school board president, came out as a lesbian during her unsuccessful run in 2003 to become chair of the Fulton County Commission.

On his website, Stadtlander cites three main issues for the campaign:

As a public school teacher and strong advocate of good stewardship for taxpayer dollars, my desire to represent District 3 on the Atlanta Board of Education is driven by three simple principles: 1. Eliminating Bullying in All Public Schools; 2. Protecting and Conserving Taxpayer Dollars; 3. Regaining Control of Our Schools. Whether you have children in the Atlanta Public School System or are a person who is simply fed up with the wasteful and detrimental actions of our current School Board Representatives, I humbly ask for your vote.

Stadtlander says the April death of 11-year-old Jaheem Herrera, a student who committed suicide in April after continued anti-gay taunts at his DeKalb school, helped convince him to seek the school board seat.

Stadtlander adds his name to a growing list of gay candidates this election season, which includes official qualifying in September for the Nov. 3 elections. Steve Brodie, Miguel Gallegos and Alex Wan are among six candidates for the District 6 seat on the city council, while Adam Brackman is running for the Post 1 At Large seat.

Kyle Williams is campaigning for the Decatur City Commission, while Eric Morrow and Kevin Hudson are running for seats on the East Point City Council.