Gay students to get resource center at GA Tech 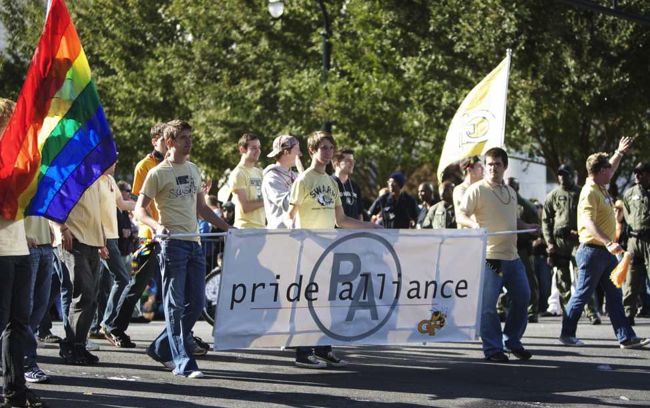 It may not be the gayest campus in Atlanta, but Georgia Tech is making progress. It's first-ever LGBTQIA Resource Center will open this spring, staffed with its first-ever LGBT director.

So add a little rainbow to the school's traditional white and gold, according to the Technique.

After several years of lobbying by various student groups and cooperation between several campus offices, the Tech LGBTQIA Resource Center is built and set to open later in the spring. The resource center will provide institutional support, event coordination and information to students identifying as gay, lesbian, transexual or as part of another sexual minority.

The office for the resource center has already been built in the Smithgall Student Services Building, and its services will be available for students after a director has been named and has arrived at Tech.

Tech is playing catch up to other campuses in metro Atlanta. Emory has long served its gay students with its Office of LGBT Life. It even gets gay staffers and alums to post their pics online. Kennesaw State opened its GLBTIQ Resource Center in 2011. UGA also offers a resource center to gay students.

The effort to open the center at Tech helps the school offer a dedicated space and trained professionals to gay students. The student-run Pride Alliance often felt overwhelmed, its leaders said.

Before the resource center was announced, Tech was one of two peer-group institutions to not have a dedicated resource for LGBT students. Although students have been able to receive support from student resources such as Pride Alliance and campus resources such as the Women’s Resource Center and the office of the Dean of Students, many felt that the lack of a central institution created issues that makes it difficult for LGBT students.