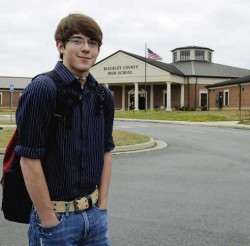 A gay honor student in Cochran, Ga., received the OK from school administrators to take his same-sex date to the prom next month, as much of a surprise to the student as it might be to the small town.

Derrick Martin, an 18-year-old senior at Bleckley County High School, asked the school about bringing his date to the prom on April 17. School policy requires permission to bring a date from outside the county, but makes no differentiation whether a date can be same-sex or not, according to the Macon Telegraph.

“It’s my senior prom, and I wanted to be able to prove not everyone would cancel prom.”

After initially resisting the request, the school’s principal and school system administrators relented after realizing they had no policy in place to prevent same-sex dates at the prom.

“You don’t have the right to say no,” principal Michelle Masters said. “As a principal, I don’t judge him. I’m taught not to judge. I have to push my own beliefs to the background.”

She’s just hoping it won’t become an issue in the community and distract from juniors and seniors who have looked forward to the event all school year.

Charlotte Pipkin, the superintendent of schools, said the school board didn’t take any votes on Martin’s request, but the board did discuss the matter during a board meeting.

“Students are allowed to bring their date to prom,” Pipkin said. “There’s nothing that says who the date is.

“I want this to be an enjoyable event, and I don’t want anything to take away from that,” she added.