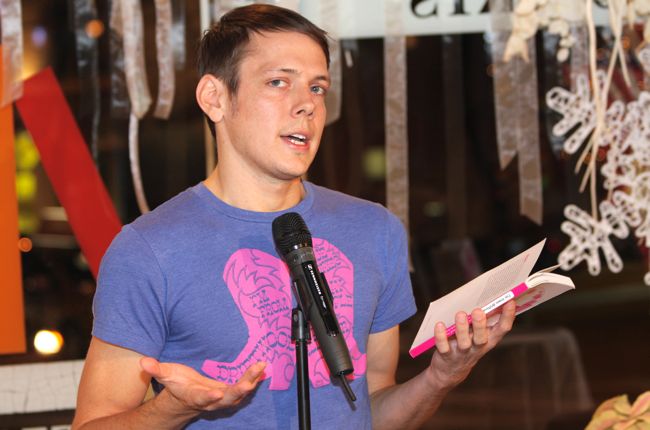 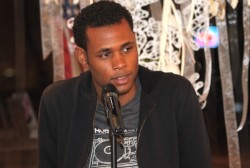 Equipped with a pair of pink cowboy boots, iPhones with Grindr, a video camera and enough ambition to fuel a four-month journey to all 50 states, Nathan Manske and Marquise Lee arrived in Georgia on Tuesday to collect the stories of LGBT people.

It’s part of the I’m From Driftwood campaign. Think a little It Gets Better Project mixed with StoryCorps, but now complete with a book — “I’m From Driftwood: True Stories from Gay People from All Over” – that the two debuted, signed and read from during an appearance Wednesday at Outwrite Bookstore.

“We did 50 states in about four months and that is really just scratching the surface,” Manske (top photo) told the crowd on Wednesday. “We are not representing entire states with what we’re doing.” 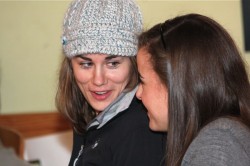 The two launched the Story Tour in September in Driftwood, Texas, where Manske was born. Though two others help with the website and planning the trips, it’s Manske and Lee (second photo) who have traveled the country recording the stories of LGBT people. They spend New Year’s Eve in Miami as they head into the home stretch of the effort, which wraps in mid January. 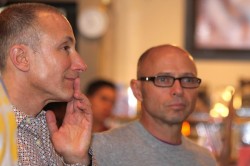 I’m From Driftwood started in Spring 2009, growing from an idea to give LGBT youth hope by telling the stories of other gay people into the StoryTour that is chronicled on their website. The book compiles those stories into printed form and it’s something Manske hopes to distribute to Gay Straight Alliances in schools.

The toughest state for the Story Tour? Manske says their few days in West Virginia in late December. They struggled to find people to tell their stories in Morgantown, so they turned to Grindr and recruited from the online cruising site. Let’s just say that didn’t end well.

They fared better in their journey to Alaska in early November, snapping photos with their pink boots in front of Sarah Palin’s home in Wasilla. They even had a lesbian hunter cook them moose burgers. 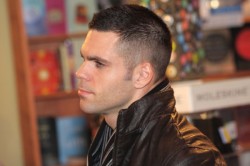 Not all of the book’s mostly PG stories are positive, Manske says. But they reflect the diversity of LGBT people, which is exactly the point. The stories show that gay people aren’t all that different from anyone else and if that’s the case, then why not treat them like everyone else, Manske explains.

And those pink boots? Manske and Lee use them at fundraisers. On Wednesday, after they wrapped up signing books, the pair headed next door to Blake’s to unwind and pull out the boots in the hopes of raising some cash to continue their Story Tour.