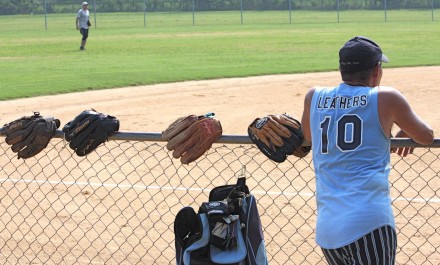 Ten teams from the Hotlanta Softball League are competing in the Gay Softball World Series, which opened play today in Seattle. Art Davenport (photo), HSL’s Open Division secretary, will be providing posts throughout the Series. Go here for a list of HSL teams taking part.

As the returning A Division Champions, the Venom were the No. 1 seed and started off the Series with a bang, easily winning both of their games on Tuesday. The Mudcats first challenge was against the LA Vipers, perhaps one of the best teams in the North American Gay Amateur Athletic Alliance (NAGAAA) with 12 Series titles, but the Mudcats were up for it.

As I have more information from the other teams, I will relay it.

Opening Ceremonies, set for Monday afternoon at the Seattle Center in the shadow of the Space Needle, were cancelled due to rain. But two speakers — Margarethe Cammermeyer, a former colonel in the Washington National Guard that came out as a lesbian and later ran unsuccessfully for Congress, and David Kopay, a former NFL player who came out as gay in 1975 – shared some inspirational words. Tonight, there are nearly 1,000 players (from NAGAAA and the Amateur Sports Alliance of North America) attending Out @ Safeco Fields to watch the Seattle Mariners play the Minnesota Twins.

HSL board representatives arrived on Friday for the NAGAAA Summer Meetings, which began at 8 a.m. on Saturday. No major news to report from the meetings — no changes to the ratings structure (though there is ongoing chatter about “14’s” moving up to B, but there’s always next year).

One bit of sad news is that the Music City League in Nashville lost its membership in NAGAAA, due to ongoing internal problems. And before I forget, the 2010 GSWS will be played in Columbus at the Berliner Park with its 31 fields in one complex.

In addition to the weekend’s meetings, there are a lot of opportunities for delegates and players to socialize and enjoy their time off the field as much as on.