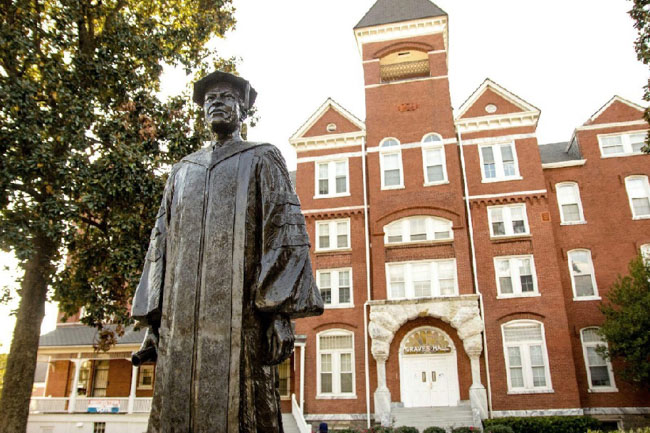 A Morehouse College student claimed that a male employee of the school touched him inappropriately and made sexual advances and when he complained to the school, it did nothing about it.

The unidentified student’s claims on Twitter triggered additional allegations by students against other Morehouse employees, leading the school to launch a broad sexual misconduct investigation of its employees.

The unidentified student made the accusations in several short videos he posted on Tuesday. He named DeMarcus Crews, assistant director of student services at the all-male Atlanta school, as the perpetrator.

“Please get Morehouse’s attention,” he wrote in the first Tweet (see below). “Myself and other students have suffered too long.”

The student said Crews started harassing and assaulting him last year when he was a freshman. Crews made sexual advances and comments at him, “telling me I need dick,” the student said. Crews also allegedly hugged him and pinched him on the cheeks.

“It got to a point where I went into a really bad depression,” he said in the first video.

The student claimed that last year he reported the incidents to the school’s Title IX office, which handles sexual misconduct claims. He never heard back from the office. The student told his parents about the incidents earlier this year, and they drove from Chicago to meet with a school administrator. No progress was made on the matter then either, according to the student.

So the student said he's hired an attorney.

On Wednesday, Morehouse President David Thomas said the school launched a formal investigation into the allegations. Crews had also been put on unpaid administrative leave, according to Thomas.

“Our sexual misconduct policy and procedures guidelines provide for disciplinary action, including dismissal, if any student or faculty and staff member engages in inappropriate behavior,” Thomas said in the prepared statement.

A Morehouse spokesperson issued another statement Thursday after students made additional allegations on social media against other Morehouse employees.

“Morehouse College is expanding its sexual misconduct investigation to include the examination of new complaints filed against additional employees,” D. Aileen Dodd, senior manager of media and public relations, said in the statement. “The new complaints were reported Wednesday following allegations made by students on social media.”

The school encourages anyone who is a victim of sexual misconduct at Morehouse to call the Ethics & Compliance Hotline at 888-299-9540.

This week’s allegations follow a former student’s accusations in November that a gay Morehouse professor groped him repeatedly during a study abroad trip. The professor said students are targeting him because of his sexuality.

The case was moved from Fulton County Superior Court to U.S. District Court in December, making it a federal lawsuit. Judge William Ray dismissed the claims against Wilson, Bailey and Peterson based on the statute of limitations.

Morehouse stands accused of two Title IX violations: clearly unreasonable response and hostile educational environment. The student’s attorneys argue that he had no equal access to educational opportunities and benefits due to Morehouse’s negligence in dealing with Peterson. He’s seeking damages for emotional pain and suffering and loss of future earning potential attributed to a Morehouse degree, plus attorneys fees.

The case is in discovery now, which will end in January.

Please get Morehouse’s attention. Myself and other students have suffered too long!! pic.twitter.com/KGmoquTCvW