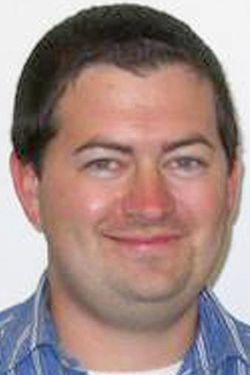 A married police officer arrested and fired after sexting with and offering a gay blowie to a 17-year-old high school athlete is taking his case to the Georgia Supreme Court on Monday.

That's when justices will hear the case of James Edwin Watson (photo), a former police officer in the southeast town of Nashville, Ga., who is challenging the state's solicitation of sodomy statue in an effort to have his conviction, and 5-year prison sentence, overturned. Watson's attorneys argue that the law is an unconstitutional abridgment of his free speech and due process rights, and that it criminalizes even basic discussions of sodomy.

In 1998, the court in Powell v. State struck down the portion of Georgia's sodomy law that criminalized "private, unforced, non-commercial acts of sexual intimacy between persons legally able to consent," which is 16 in the state.

"[Watson] was looking for a sexual encounter that, according to the Georgia Supreme Court, is constitutionally protected and ‘is at the heart of the Georgia Constitution’s protection of the right of privacy," his attorneys argue in court filings.

Prosecutors have successfully tied Watson's solicitation of sex to his public duties as a police officer, which falls under the portion of the state law that wasn't struck down in 1998.

“[Watson] sought to barter his official police services in exchange for sexual favors,” the state argues.

The case dates to March 1, 2009 when Watson, a then 27-year-old officer with the Nashville Police Department in Berrien County, responded to call about a dog attack. The teen, 17-year-old C.B., was with a friend whose dog was attacked. After Watson addressed the situation, he offered to give C.B. a ride home. Less than two weeks later, Watson was ensnared in a GBI sting, arrested and later convicted for solicitation of sodomy.

Here's how the Georgia Supreme Court summarizes the case:

After dealing with the dog situation, Watson gave C.B. a ride home. The next day, Watson added C.B. as a “friend” on both MySpace and Facebook and sent this message: “Well, I guess we need to discuss my payment for yesterday. You asked what I wanted, so does that mean I get what I want, no matter what it is? I guess I know what I want I am just a little nervous about asking, because I am not sure you will go for it.”

On March 4, C.B. was waiting to play at a high school tennis match when he read Watson’s message on his Facebook page. C.B. then sent a text to Watson and asked what he had meant by the messages he’d sent on Facebook and MySpace. Watson texted back: “What about me and u getting 2gether sometime 2 have a little fun if u know what I mean.” C.B. responded that he wasn’t “like that,” to which Watson replied, “ok well if u change ur mind just let me know u may like it i didn’t until someone talk me into it which I don’t do it all the time u know I do have a wife.” C.B. then told his high school tennis coach what had been happening and showed her the text messages. She told the high school principal who called law enforcement.

On March 13, C.B. met with a GBI Special Agent and agreed to make two recorded telephone calls to Watson in the agent’s presence. C.B. made the calls, asking what Watson wanted for payment. After the first call, Watson texted the boy and said his wife was gone and C.B. could come to his house because he “had everything they would need” there. During the second call, Watson explicitly said he’d perform oral sex on C.B. and suggested the boy might enjoy having sex with him. Based on these conversations, Watson was arrested and indicted for two felony counts of violating his oath of office and two misdemeanor counts of solicitation of sodomy.

Before his trial, Watson filed a motion to “quash,” or set aside, his indictment, which the trial court refused to do. He then requested that the Georgia Supreme Court consider his pre-trial appeal of the trial court’s refusal, but the high court denied his application. In March 2011, a jury convicted him of all four counts and he was sentenced to five years, to serve two in prison and the balance on probation with certain conditions. His motion for new trial was denied, and Watson now appeals to the state Supreme Court.

Here's how the court summarizes the legal arguments in the case:

Watson’s attorneys argue that Georgia’s solicitation of sodomy statute is an unconstitutional abridgment of his free speech and due process rights and unconstitutionally infringes on Watson’s rights of privacy and liberty. It criminalizes the mere discussion of acts of sodomy. Under its 1998 decision in Powell v. State, the Georgia Supreme Court held the sodomy statute unconstitutional “insofar as it criminalizes the performance of private, unforced, non-commercial acts of sexual intimacy between persons legally able to consent…” (The age of consent in Georgia is 16.) “In this case, the Appellant’s communications were private discussions making inquiries to explore the possibility that [C.B.] may be inclined to have a private, consensual, sexual encounter,” the attorneys argue in briefs. “The Appellant was looking for a sexual encounter that, according to the Georgia Supreme Court, is constitutionally protected and ‘is at the heart of the Georgia Constitution’s protection of the right of privacy.”

After C.B. told Watson he wasn’t “like that,” Watson had no further contact with C.B. until C.B., under the instructions of the G.B.I. agent, sought out Watson. “Because these conversations were initiated after Mr. Watson told [C.B.] to let him know if he changed his mind, Mr. Watson could only assume that [C.B.] had changed his mind and wanted to discuss a consensual encounter with Mr. Watson,” the attorneys argue. “The case does not involve force. It does not involve those who are incapable of giving consent. There is nothing in the facts that would indicate this was some type of commercial transaction. It does not involve public conduct or prostitution.”

The statute is overbroad, vague and violates Watson’s constitutional right to due process, which “requires the law give a person of ordinary intelligence fair warning that specific conduct is forbidden,” Watson’s attorneys argue. “Both the Georgia Supreme Court and the United States Supreme Court have held that acts of sexual intimacy between consenting adults in private are protected by the rights of liberty and privacy under the Georgia and United States Constitutions.” Finally, there is no connection between the offenses of solicitation of sodomy and Watson’s official duties as a police officer, and the trial court erred in denying his motions for a directed verdict of acquittal on the charges that he violated his oath of office, Watson’s attorneys argue. The state argues the trial court properly denied Watson’s motion to quash the indictment. While the Powell decision struck down as unconstitutional the solicitation of sodomy statute involving “private, unforced non-commercial acts of sexual intimacy” between consenting adults, it also specifically approved of limiting a defendant’s privacy rights where the defendant was “performing public duties,” the state argues. “In this case, the trial court found a connection existed between Appellant’s official duties as a police officer (his ‘public duties’) and the offenses charged due to Appellant’s insistence on ‘payment’ from the victim for his services rendered as a police officer when Appellant drove the victim home in his patrol car.”

Watson’s solicitation of sodomy in exchange for performing his public police services transformed the encounter into a commercial transaction, the state contends. The solicitation of sodomy statute is constitutional as it applies to Watson and does not infringe on his constitutional right of free speech, the state argues. “When a law enforcement officer suggests to a 17-year-old that payment is required in exchange for performing his sworn duties, and then actively pursues that line of solicitation through a series of texts, social media messages, and two separate phone calls, the speech is not, and should not, be protected.” The statute does not violate Watson’s constitutional rights of due process or privacy, the state contends. And the trial court properly denied Watson’s motion for a directed verdict of acquittal of the two counts of violation of oath of office. In this case, “Appellant sought to barter his official police services in exchange for sexual favors,” the state contends.