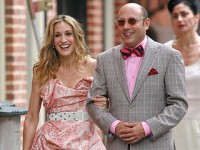 If you don’t want to know anything about the “Sex & the City” movie sequel before you plant your gay ass in a theater seat when it finally releases, then stop reading now — if you can stand it.

Hollywood insiders are already clamoring to dish tons of dirt on plans for “Sex & the City 2,” including plot lines like the return of Samantha’s cancer and boyfriend, a recession hit for Carrie and Big, a malpractice suit and new restaurant for Miranda, and a big nasty marriage speedbump for Charlotte and Harry, who were about the only ones without tragic drama in the first movie.

Take all that with a grain of salt. It comes from In Touch Weekly, and the studio will neither confirm nor deny those reports.

But the biggest, gayest, latest news comes as a bit of a surprise for fans of the HBO series. Then again, perhaps we should have seen it coming with the two-second New Year’s kiss in the first movie between Stanford and Anthony, the girls’ gay sidekicks. They also broke bread briefly in the movie’s final montage. According to MSNBC and Life & Style magazine, the two men who hated each other on TV will come around in a big way in the next movie, filming now with no release date set.

Yes, the wimpy Stanford and the smart-mouthed Anthony will apparently be married come sequel time — with the Fierce Female Foursome in attendance, of course.

We admit it. We love “Sex & the City” by default, so let’s hope the sequel lives up to the TV series and the entertaining first cinematic endeavor. Fingers crossed, because ours will be among the gay asses planted in the theater, whatever the final plotline becomes.