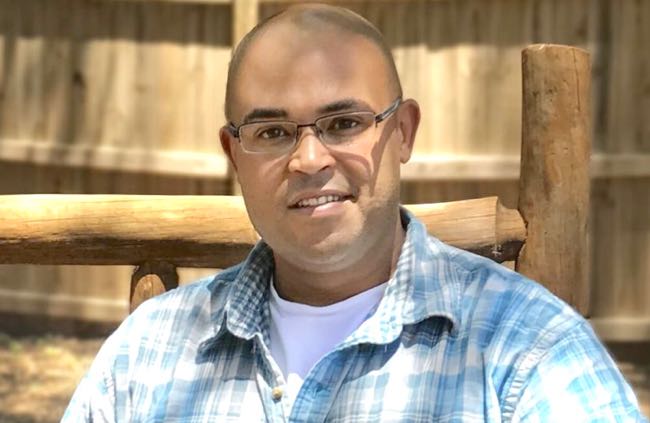 Gay veteran and small business owner Danny Ellyson announced his campaign for Congress, hoping to unseat an anti-LGBT lawmaker in central Georgia. And he's running as a “progressive Republican.”

Ellyson, a disabled Iraq War veteran, lives in Warner Robins with his husband and two children. He's hoping to unseat U.S. Rep. Austin Scott, a Republican from Tifton, in the state's 8th Congressional District, in the GOP primary in 2018. Via AJC:

“The progressive nature of what we’re doing, and I do identify as a progressive Republican, is not about just throwing laws up because laws can be thrown up,” he said. “It’s simply saying that I believe in taking away laws that are not productive. I believe in the restructuring and the evaluation of everything that’s in existence. Some things need to be removed and some things need to be created and negotiated.”

And to put another political twist on this Republican versus Republican race, Ellyson launched his campaign with the help of Brand New Congress – an effort with ties to supporters of Sen. Bernie Sanders and his presidential campaign. Ellyson, though, makes it clear in an interview with the AJC that he's not a Bernie man.

He’s operating under the umbrella of Brand New Congress, a political action committee started by more than a dozen volunteers from Sanders’ presidential campaign that’s pushing for evicting Washington’s “corrupt and complacent political establishment.” The group aims to recruit grassroots candidates that emphasize many of Sanders’ signature policies, including free college, overhauling the criminal justice system and removing big money from politics.

In an interview earlier this week, Ellyson said he isn’t a Sanders candidate.

Ellyson brings an impressive background to the race. He's an Army veteran, started and runs a landscaping business and talks freely about his family and children. From his website:

After leaving the corporate sector, I founded a small family landscaping business back in my hometown of Warner Robins. I love running a small business that not only helps provide for my family, it also creates employment for our community in Houston County. I share the joy of my two children with my husband Nate, a nine-year old son and five year-old daughter. My husband Nate has dropped out of college in order to run the company and provide for our family while I make this bid for Congress. I couldn't be more proud of him or more grateful to him.

Ellyson is gearing up his campaign and fundraising, hoping to initially raise $50,000 in an online effort. The AJC noted that Scott already has $400,000 in his campaign war chest.

On Friday, Ellyson hosts a meet and greet at his home in Warner Robins. Then he hits the streets on June 24 for the campaign's first door-knocking and canvassing event.

Block your calendar, wake up, show up, and show out. I am calling all of my friends and followers to come join me for our first door knocking event on the 24th of June in Warner Robins. I need volunteers and people that are serious about the 8th District of Georgia's future, and the American way of life!