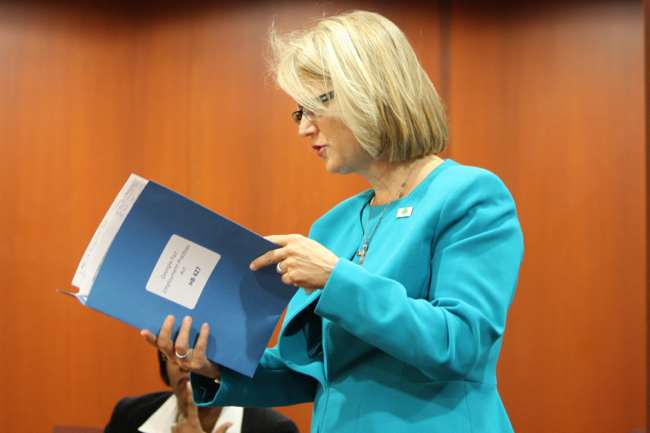 A bill that would protect gay state employees from discrimination received a friendly hearing from a conservative House subcommittee on Wednesday, including personal testimony from two lesbian lawmakers who discussed the bias they face at the State Capitol. It's unlikely that the measure -- House Bill 427 or the Georgia Fair Employment Practices Act -- will see any additional action during the closing days of the current legislative session. But the hearing included poignant testimony from Rep. Karla Drenner (photo), the bill's sponsor, and Rep. Keisha Waites. "When most people learn that I am a member of the LGBT community, things start to change," Waites said. "It happens every day and it happens right here under the Gold Dome." In addition to Drenner and Waites, six other people testified in favor of the proposal including Jeff Graham, Georgia Equality's executive director, students from Georgia Perimeter College and Georgia State University, and an employment discrimination attorney. No opponents of the bill appeared at the session, a stark departure from a contentious hearing in February 2012. Even the state's Hater-in-Chief and her bigot buddies didn't show. Here's a video recap of some of the most compelling testimony.

Karla Drenner and Keisha Waites on anti-gay bias they face.