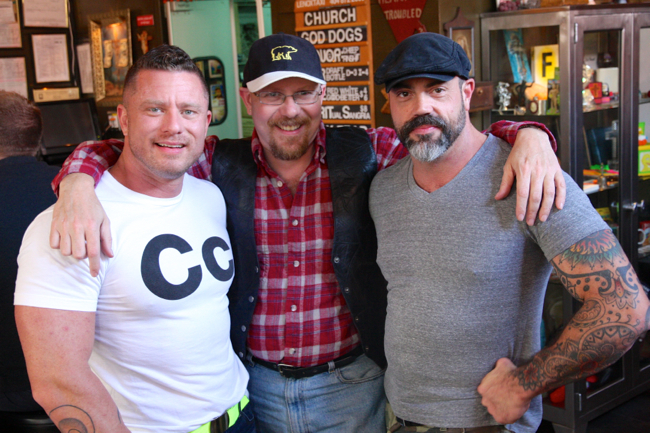 The first episode of “Queer Across America” shot in Augusta, but a large Atlanta contingent in the cast made it easy to shoot the first scenes at gay-owned Edgewood bar Sister Louisa’s Church. The show seeks to take the group of gay men around the country, where they visit gay and decidedly un-gay sites, attend events, do charity work, and educate themselves and others about gay life in America. On Dec. 7, show creator Keith Bailey (top photo, center) and his fellow executive producers Charlie Harding and Scotty Rage (left, right) welcomed all eight cast members to Atlanta’s alterna-bar Sister Louisa's Church of the Living Room & Ping Pong Emporium. "Queer Across America" cameras rolled on cast introductions before the crew headed to Augusta to film the first episode. The goal to film a second episode in Atlanta this month was waylaid by the holidays. Shooting of a Charlotte, N.C., episode is scheduled for January, then Atlanta, and on to New Orleans, Cleveland, Phoenix, New York and Las Vegas. Atlanta gays can get on board with the project and see all eight cast members by visiting the show's Indiegogo crowdfuding campaign. You can also keep up with their activities via Facebook. Go get to know the five Atlanta-based cast members.