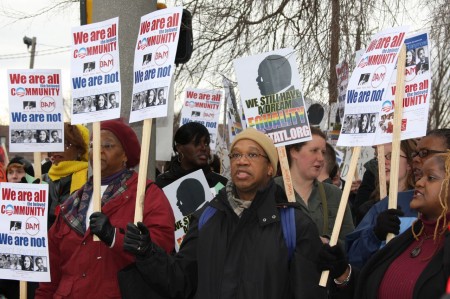 The national uproar over Rev. Rick Warren spilled into the streets of Atlanta during services for the Martin Luther King Jr. holiday on Monday.

About 75 mostly gay and lesbian people stood across the street from Ebenezer Baptist Church, where Warren headlined the annual service, and chanted their disapproval for the selection and the California pastor’s views against marriage equality and other progressive causes.

The protest was the work of the Atlanta Black LGBT Coalition, GLBT ATL and other progressive groups who have spoken out forcefully against Warren’s inclusion in the events.

Organizers of the protest said they wanted to express their opposition to the King Center’s selection of Warren to take part in the MLK services.

“We wanted to send a message of love and acceptance and assert our place that we are all part of the beloved community,” said Craig Washington, a co-founder of the coalition and an organizer of the protest. “The turnout signals that we are ready for change and recognize that change takes effort and struggle and showing up. People today decided to show up.”

“It’s in the spirit of Dr. King and the vision of Coretta Scott King when she founded the King Center. Because when we fail to call out bigotry and discrimination such that Rick Warren promotes, then we abandon that dream and desecrate that legacy,” he added.

Fox 5 includes its full video report with an Associated Press story, while WABE includes its radio report online. National Public Radio also weighed with its own report this morning.