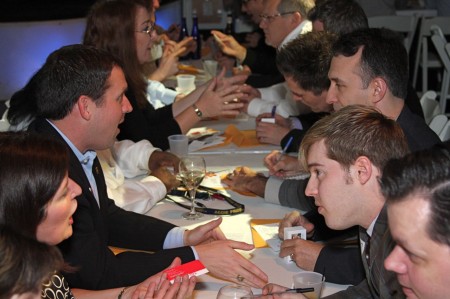 There’s speed dating. And now, thanks to the Atlanta Executive Network and Out & Equal Atlanta, there’s speed networking.

The two groups joined forces for the March 19 event at Jungle. More than 175 people sat through a quick primer on speed networking before moving through two-minute drills with a second person across a table. When the time expired, participants shifted a chair and repeated the process for several rounds. Pitched as March Madness, a riff on the NCAA Men’s Basketball Tournament that opened this week, the evening provided a crash course in professional networking.

On April 16, Susan Booth, artistic director for the Alliance Theater, is scheduled to speak to AEN. Out & Equal hosts a Workplace Leaders Happy Hour April 2.