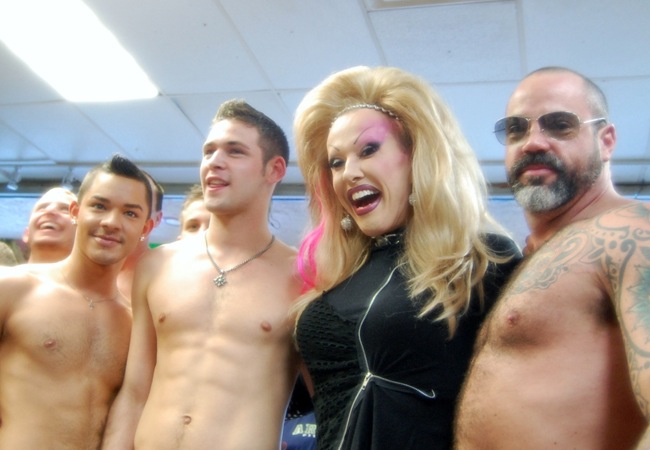 But on Saturday, there she was with a handful of sexy male sex stars, including Charlie Harding, Jason Sparks and Duncan Black, inside the adults-only variety store. The boys were stuffed into Jack Adams jocks to raise money for Pets Are Loving Support, the gay charity that cares for the pets of critically-ill Atlantans.

Guests could buy the jocks right off the guys and buy they did. The event raised $1,076 for PALS.

We love when hunks show off during Pride. Even better is when gay adult film actors strut their stuff for charity during the rainbow festival. Last year, Mary Edith Pitts paraded around Brushstrokes Pleasures with the likes of Sparks, Steven Daigle and Jake Steel.

Not so much charity as it was pure sexual heat, Jesse Santana and Angelo Marconi hit Jungle during Pride last year to strip down and toss around sex toys during a Manhunt promotional tour.

Photos by Paul Beauchamp of Gayborhood