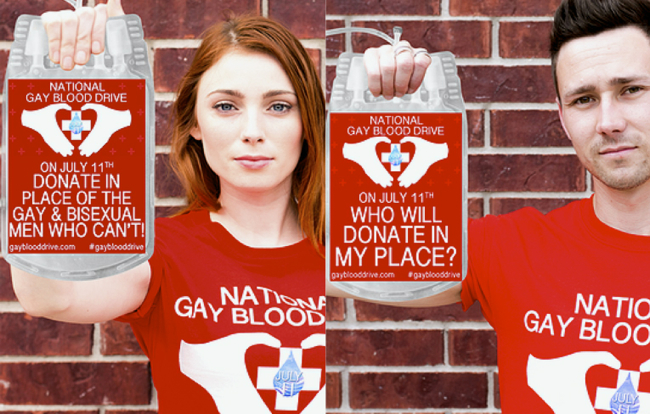 Archaic. Discriminatory. Unnecessary. Just plain dumb. These are just a few of the perfectly valid adjectives for the three-decade FDA ban on gay male blood donors. Now you can take a stand during the National Gay Blood Drive.
But bring a friend to Friday’s event (video above), because despite best efforts of activists and the medical community, your gay blood is not welcome. In fact, that’s the point of the National Gay Blood Drive: Bring an ally to donate crucial blood in your place, because the United States bars any gay or bisexual man from giving blood.
Due to fears associated with the gay connection to AIDS in the early ‘80s, any man who has had sex with another man – even once, even with a condom – since 1977 is barred from giving blood for life. That might have made sense for a couple of years after the 1983 policy went into effect, but every donation in the U.S. is screened for HIV anyway, so now the ban is ignorant.
And biased, says Ben Nicoara, an organizer of the Atlanta effort during Friday’s drive at Ten Atlanta. Sister events will take place in 60 other cities across the U.S.
“We will essentially be telling the FDA, ‘Look at how much blood we brought you. Imagine how much more blood – twice as much! – you could add to the supply if you would modify your outdated policy,'” Nicoara tells Project Q.
“The H in HIV does not stand for 'homosexual' but rather for 'human.' Everyone can potentially be infected by HIV, so blocking someone for their entire lifetime … is prejudiced and homophobic,” he adds.
During last year’s first gay blood drive, gay and bisexual men showed up to donate blood and were turned away to make a statement. That was that. This year, it’s more “How to drain friends and influence people.”
“There’s huge momentum behind it, and this event will create change in the direction of our equal rights,” Nicoara continues. “We are not second-class citizens and our blood is the same as everyone else’s.
Whether you’re an ally or a gay man thinking of participating at Ten on Friday, there’s plenty of motivation to do it, he adds.
“If you’re a straight ally on the fence, just know: giving blood is easy. You will be well taken-care of, and it only takes a few minutes,” Nicoara says. “If you’re a gay/bisexual man on the fence, you have no excuse for not participating. All it entails is showing up, signing a petition, getting a free t-shirt, taking a photo, and supporting your straight ally while he or she gives blood in your honor.
And there’s plenty of room to join in. Twelve of the 50 10-minute timeslots are filled, and 44 people have RSVP’d “yes” to the Facebook invite. You and yours can drop in to donate too, but an appointment is appreciated and encouraged.
“Please consider being a part of something huge that will be a turning point in the history of medicine and LGBT history,” Nicoara urges. “Reducing the fear, stigma and ignorance surrounding HIV/AIDS will have further implications on our future as we get closer and closer to finding a cure as well.”
Sign up for you and a friend to give blood and make a statement during National Gay Blood Drive Atlanta on Friday, July 11, 9 a.m. – 5 p.m. at Ten Atlanta. You can also sign the White House petition to end the FDA and HHS ban.