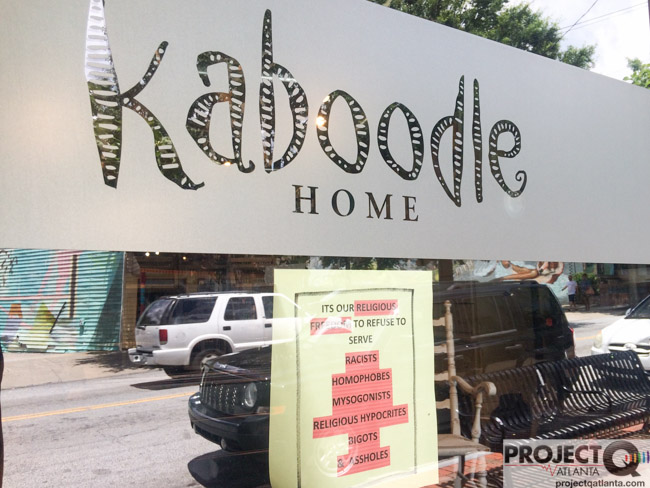 Homophobes and bigots, beware. Michael Knight – the gay man who has owned Kaboodle in East Atlanta for 20 years – has a sign posted in a front window just for you.

It tells “racists, homophobes, misogynists, religious hypocrites, bigots and assholes,” that Kaboodle – a furniture and home goods store in the heart of the village – considers it their “religious freedom to refuse to serve” those customers. It's a grassroots response to the anti-LGBT “religious freedom” debate in Georgia and across the country.

Knight, 54, said this isn't the first time he’s put signs outside of his business. He used to regularly sport signs promoting marriage equality when debate over same-sex marriage was raging.

“I’ve been here 20 years, and back when we first opened, the big marriage debate was going on. I mean we used to put stuff on our windows all the time. I don’t do it as much as I used to,” Knight said.

“A lot of people like it. There’s probably some people who have liked it from the other side who don’t tell me exactly why they like but just that they like it,” Knight said.

“Country people will come in here and say, ‘Oh I like your sign out there,’ and they probably don’t know that’s it’s directed towards them,” he added.

Knight put the flyer in the window after the presidential election in November to express his dismay about the hypocrisy of religious conservatives who promote “religious freedom.” In Georgia, anti-LGBT religious freedom legislation has dominated the legislature for several years. In 2016, Gov. Nathan Deal vetoed a measure widely criticized for attacking LGBT people.

“If you have deeply held religious beliefs, they can’t be just against one part, for one thing the Bible says, they need to be for everything, you know?” Knight said.

Apparently the sign works. Knight said he hasn’t had to remove any customers from his store. 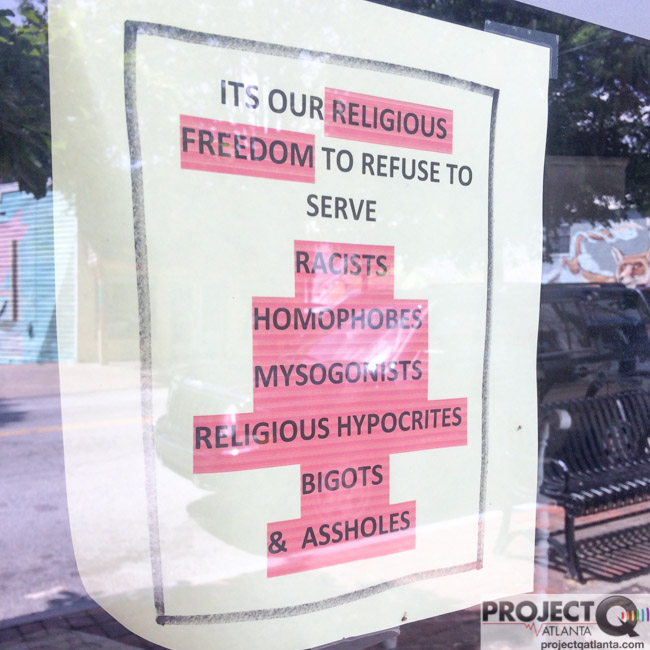