Gay-owned gallery invites you to ‘Wonderland’ 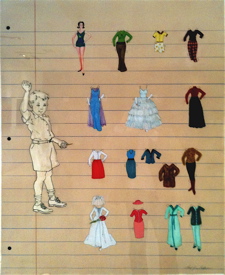 When the professors of the Savannah College of Art & Design-Atlanta team up, art lovers take notice. When they hold their seasonal exhibition opening at Midtown’s Kai Lin Art, art fags do a double-take.

That’s the case Friday, when the contemporary art space opens “Wonderland” on Friday. Everybody dreams of going to anything called Wonderland, right? Throw in the fact that one of the SCAD contributors is gay artist Larry Jens Anderson, and we’re simply in a tizzy.

Yes, Anderson, who delighted Pride goers with his “Only Dick, No Jane” exhibit at the W Atlanta Midtown in October, is part of the show, ensuring his fun, thought-provoking point of view is in the mix. Anderson’s mixed-media works “Dick Learns to Draw” (photo) are the artist’s contribution to the Kai Lin exhibit.

But seriously, now. Does art alone make a party, much less a Wonderland? No, friends, it does not. That’s why we love this gay-owned gallery. Enjoy a complimentary glass of wine, have your picture taken in the WOW Photo Booth, and enjoy inspired music by the Medeology Collective’s live VJ show “X-Ray X-Mas” to put you in a festive holiday mood.

Now it’s a party. And an afterparty? Natch. The hot new Michael Habachy-designed lounge Aurum—in the Metropolis building at 108 8th St.—hosts the post-opening festivities just two blocks from the gallery. The afterparty begins at 11 p.m.

The “Wonderland” exhibit runs through Jan. 22, so stop by to check it out if you can’t make the opening.