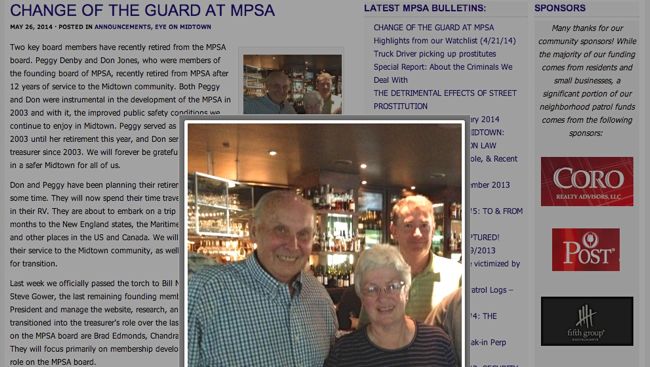 The meanest woman in Midtown has retired from her perch atop the Midtown Ponce Security Alliance, the iron throne from which she waged war on "thugs in drag," demonized gay clubs and dehumanized the homeless as something other than "regular people."

The MPSA announced Monday that Peggy Denby, one of its founders and longtime president, retired from the board. She and her husband Don, also stepping down from his board seat, are packing their RV and riding off into the sunset.

Two key board members have recently retired from the MPSA board. Peggy Denby and Don Jones, who were members of the founding board of MPSA, recently retired from MPSA after 12 years of service to the Midtown community. Both Peggy and Don were instrumental in the development of the MPSA in 2003 and with it, the improved public safety conditions we continue to enjoy in Midtown. Peggy served as President from 2003 until her retirement this year, and Don served as treasurer since 2003. We will forever be grateful for their role in a safer Midtown for all of us.

Don and Peggy have been planning their retirement for quite some time. They will now spend their time traveling the world in their RV. They are about to embark on a trip lasting several months to the New England states, the Maritime provinces, and other places in the US and Canada. We will sorely miss them, but will forever be grateful for their service to the Midtown community, as well as for the ample time they provided the board for transition.

Gird your gay loins, New England. This bitter pill isn't fond of gay clubs, helped to close 24-hour dance club Backstreet, worked to banish sex workers from her neighborhood, sanctioned an offensive war on transgender prostitutes and sat quietly by when an Atlanta police commander dismissed a Piedmont Park murder as little more than a gay hustle gone bad. She's not above dismissing homeless people along the Beltline as something less than "regular people."

Will her departure change the group's transphobic war on prostitutes? Probably not. The gay man who heads up that effort, which even smart people criticize, is Steve Gower. He remains firmly in place.

Steve Gower, the last remaining founding member of the MPSA board, will continue as Vice President and manage the website, research, and the watchlist.