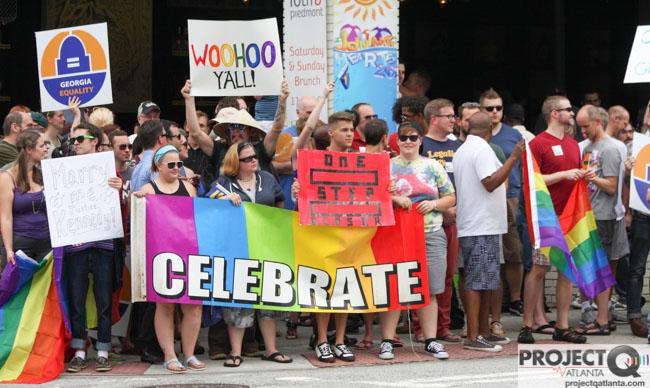 The U.S. Supreme Court ruled 5-4 on Friday that the 14th Amendment requires states to marry gay couples and to recognize out-of-state marriages among LGBT couples.

“No union is more profound than marriage, for it embodies the highest ideals of love, fidelity, devotion, sacrifice, and family. … [The challengers] ask for equal dignity in the eyes of the law. The Constitution grants them that right,” according to the decision.

The decision brings marriage equality to the 13 states – including Georgia – that still had gay marriage bans in place. Georgia lawmakers banned gay marriage in 1996 and eight years later, in 2004, Georgia voters overwhelmingly voted to add a ban to the state constitution. A lawsuit to overturn that ban failed in 2006.

Today is a big step in our march toward equality. Gay and lesbian couples now have the right to marry, just like anyone else. #LoveWins

Watch President Obama’s full statement to the nation, in which he credits LGBT activists and laymen alike:

“Today, we can say in no uncertain terms that we’ve made our union a little more perfect. That’s the consequence of a decision from the Supreme Court, but more importantly, it is a consequence of the countless small acts of courage of millions of people across decades who stood up, who came out, talked to parents, parents who loved their children no matter what, folks who were willing to endure bullying and taunts, and stayed strong, and came to believe in themselves and who they were.

And slowly made an entire country realize that love is love.”

The historic ruling on Friday came from arguments in April in four cases – Obergefell v. Hodges in Ohio, Deboer  v. Snyder in Michigan, Bourke v. Beshear in Kentucky and Tanco v. Haslam in Tennessee. Georgia has its own gay marriage lawsuit – Inniss v. Aderhold filed in April 2014 – but that case was put on hold when the high court heard arguments in the challenges from other states.

In May, Jim Obergefell told the HRC Atlanta gala dinner that he was humbled to play a small part in moving the marriage equality fight forward.

“We have to stand up not just for ourselves but for every LGBT person who has lived a life of fear not knowing the joy of living the true life they wanted or deserved,” he said.

Obergefell’s partner, John Arthur, was diagnosed with Lou Gehrig’s disease in 2011. In 2013, the couple of more than 20 years flew from Ohio in a plane designed to address Arthur’s medical needs so they could be married on the tarmac at Baltimore-Washington International Airport. When they returned to Ohio, the couple sued for recognition of their marriage so that Obergefell’s name would appear on Arthur’s death certificate. Arthur died shortly after their return.

Now, nearly 11,000 gay couples across Georgia are expected to marry in the next three years, bringing a $78.8 million economic boom to the state. Rallies are planned across Georgia to celebrate the decision, including one at the National Center for Civil & Human Rights on Ivan Allen Jr. Boulevard in downtown Atlanta. St. Luke’s Episcopal Church on Peachtree is planning an interfaith celebration and Ten Atlanta will celebrate with cocktails.

Rallies are also planned in Athens, Augusta, Columbus, Macon, Savannah and Valdosta. Check the full list as compiled by Georgia Equality, which sent its own supporters a celebratory note about the decision and Friday’s events, a constantly updated resource page for couples wanting to marry, and a nod to the future of LGBT rights.

We know there’s more work to do to winequality for LGBT people in our state – and we are committed to continuing the fight and pushing until our entire community is treated equally.

Today, we can celebrate one huge step toward that beautiful future. We’re so happy to be celebrating this historic decision with you.

And counties across metro Atlanta have been preparing for gay marriage. Probate judges – the ones who issue marriage licenses – have already changed their application form. Fulton made it clear they embrace marriage equality and even Cobb officials say they are ready.

Gay marriage opponents, though, vow to fight on. And on the eve of their defeat, they decided to start playing victim, whining that LGBT activists are bullying them. Prepare to hear that argument again when lawmakers return to the State Capitol in January and face “religious freedom” legislation again.

But businesses are ready. And so are scores of officiants ready to marry gay couples. Check the full list here.

Reaction to the Supreme Cout decision came quickly on Friday.

“Today is a huge victory not only for advocates of marriage equality, but advocates of basic civil rights. This decision is the culmination of decades’ worth of battles fought to ensure that all families and the love they share are protected and treated equally under the law.”

And probate judges are ready:

“The Council of Probate Court Judges is reviewing the 100 plus page opinion regarding same sex marriage and we are in consultation with the Attorney General’s office. A revised marriage license application form will be sent electronically to probate judges statewide via our list serve once the review is complete and we find the opinion immediately legalizes same sex marriage in Georgia.”

“Today is an historic occasion for the City of Atlanta, for Georgia, and for America. The Supreme Court’s ruling marks a momentous victory for freedom, equality, and love. It is clear that the arc of history continues to bend ever closer toward justice.

The Court’s ruling is a powerful testament to our country’s founding principles. Surely if we are a nation of equality and justice, then no loving couple should be treated as inferior to any other. If we truly believe in equal protection under the law, then we must defend this fundamental right to marriage.

Atlantans have long worked to create a just and inclusive society. We have a proud history of upholding human rights and providing equal opportunity to all people. That history is rooted in the knowledge that our diversity makes our city stronger.

I urge Georgia’s state and county officials to move swiftly to implement the Supreme Court’s ruling and the Constitution’s command. Atlanta’s same-sex couples have already waited far too long for the respect and dignity they deserve.”

“The Court reaffirmed what so many of us in Fulton County have long believed,” says Chairman Eaves.  “This community has long worked on behalf of supporting equal rights for all of our citizens.  I am overjoyed to see that belief reflected by the nation’s highest court.”

DeKalb County is ready, too. They’re even staying open extra hours on Saturday, June 27, from 8 a.m. to noon, for happy couples.

“The highest court in the land has ruled on the issue, and it is up to rest of the judiciary to follow the law and accommodate the citizens of each jurisdiction,” said DeKalb County Probate Judge Jeryl Rosh.  “To that end, we will be open this Saturday to accommodate DeKalb County residents with their questions and applications for marriage licenses.”

And happy about it or not, Georgia’s Attorney General issued a statement of compliance.

The state of Georgia is subject to the laws of the United States, and we will follow them.

“I am absolutely overjoyed for the Supreme Court’s ruling, and the willingness to uphold the values of family. The 14th Amendment requires equal protection under the law – and that should include every citizen, regardless of their sexual orientation. We still have a tremendous amount of work to do to reach full equality, but today’s ruling is a long fought victory for many of Georgia’s families who can now live their lives with the same legal marriage rights as every other citizen.”

“I am gratified by the Court’s recent ruling and the willingness to place principle over politics. The Supreme Court’s acceptance is the step in the right direction for Georgia, but I believe that we still have a lot of work to do in order for the LGBT community to overcome discrimination.”

“Today’s historic ruling by the Supreme Court is a major victory for the LGBT community and allies across the nation. Same-sex couples have been denied the right to marry for far too long – and I am thrilled that they can now enjoy the same fundamental right to marry afforded to straight couples.”

Marriage equality has come to #Georgia—and the nation: #SCOTUS rules in favor of marriage in all 50 states #LoveWins pic.twitter.com/EO5doOJe8B

And gay people in Atlanta got married.

The second same-sex couple to legally wed at Fulton County courthouse fills out paperwork while choking up. #gapol pic.twitter.com/FwRXvn7Q9F