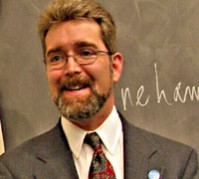 An outspoken opponent of same-sex marriage that says his criticism is unfairly labeled hate speech will lecture at Oglethorpe University in Atlanta on Monday, an appearance that is sparking plans from LGBT students for a “peaceful protest.”

Gay students and their allies plan to attend the afternoon lecture of Matthew J. Franck (photo), a director with the Witherspoon Institute, a New Jersey-based conservative think tank, wearing purple shirts affixed with rainbow stickers to show their opposition to his appearance and support marriage equality.

“I was just getting so infuriated that he was coming to our school,” says Brittany Weiner, a junior at the campus in northeast Atlanta who is organizing the protest along with her partner Jess Graner.

“Nothing is more personal to me than saying I can’t marry the person I love. Oglethorpe is such an accepting community that I couldn’t believe it,” she adds.

Franck is coming to campus as the first in a series of lectures on “Contemporary Constitutional Controversies,” hosted by the school’s Division of History, Politics & International Studies. His lecture is titled “Changing ‘Hate’ in the Same-Sex Marriage Debate: How to Stop an Argument You’re Losing and Endanger Freedom While You’re At It.”

Franck was invited to speak by Joseph Knippenberg, a longtime history professor and blogger who recently compared homosexuality to incest. Franck’s lecture is sponsored by the Charles G. Koch Charitable Foundation, an organization that is funded by billionaire Charles Koch, who along with his brother David owns Koch Industries and have given more than $100 million to right-wing causes.

The Kansas-based Koch Industries, the second-largest private company in the U.S., owns Atlanta’s Georgia-Pacific. The Koch brothers also back Americans for Prosperity, a conservative group whose Georgia chapter holds a Defending the American Dream Summit on April 30. Past speakers have included anti-gay politicos Herman Cain and Erick Erickson, as well as gay-friendly radio host Neal Boortz.

First, ignore the arguments of traditional marriage’s defenders, that marriage has always existed in order to bring men and women together so that children will have mothers and fathers, and that same-sex marriage is not an expansion but a dismantling of the institution. Instead, assert that no rational arguments along these lines even exist and so no refutation is necessary, and insinuate that those who merely want to defend marriage are “anti-gay thugs” or “theocrats” or “Taliban,” as some critics have said.

Second, drive the wedge between faith and reason, chasing traditional religious arguments on marriage and morality underground, as private forms of irrationality.

Finally, decree the victory of the new public morality – here the judges have their role in the liberal strategy – and read the opponents of the new dispensation out of polite society, as the crazed bigots of our day.

American democracy doesn’t need civility enforcers, nor must it become a public square with signs reading “no labels allowed.” Robust debate is necessarily passionate debate, especially on a question like marriage. But the charge of “hate” is not a contribution to argument; it’s the recourse of people who would rather not have an argument at all.

On March 1, Franck criticized President Obama’s shift in calling the Defense of Marriage Act unconstitutional and directing the Justice Department to stop defending the 1996 law in court. He’s also criticized the ruling overturning Prop 8, the gay marriage ban in California.

Weiner says she and Graner started planning their reaction to Franck’s campus appearance after a professor at the school tipped them to the planned lecture. The response to the call to action has been swift and positive, Weiner says. A Facebook invitation for the protest has nearly 70 people attending.

She says it’s the first time she’s organized an action like this, though she and Graner attended a Midtown rally last year to counter an anti-gay picket. The pair is working with campus gay group OUTlet on the protest. The lecture – which takes place at 4 p.m. at the Emerson Student Center – and the protest are open to the public, Weiner says.

“I’ve been so surprised by the responses that I’ve received. Passion moved me to do this,” Weiner says.