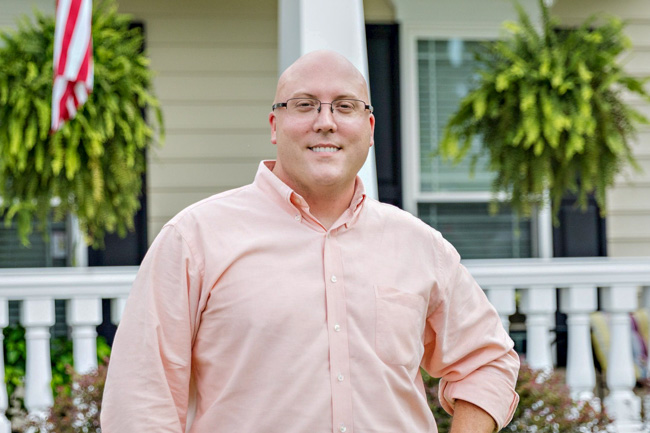 Pooler business person Adam Bridges is moving on from a state House race loss to try and become the second openly LGBTQ mayor in Georgia.

Bridges (photo), 43, announced a run for Pooler mayor on July 15. The city of 24,000 is located just outside Savannah in Chatham County.

Bridges was moved to run after reviewing post-election voting data from his House District 161 race in 2018.

“Unfortunately, I lost, however I won Chatham County with a significant amount of votes in the Pooler area,” he told Project Q Atlanta.

Bridges, who served four years in the U.S. Marine Corps, owns a local liquor store and he’s served on the Pooler Chamber of Commerce for eight years, with one year as president.

“Right now, our traffic is extremely congested due to all the building, and I put this on the current leadership because they’ve known about this for 20 years,” he said.

Lamb has been Pooler’s mayor since 2004.

The climate for LGBTQ people in Pooler is “a struggle,” Bridges said.

“But at the same time, overall the business community and the residents look at my character and what I can bring to the table,” he said. “I have shown that I am all about fairness. If something’s not right, we need to change it. I’m very active in the community. I haven’t gotten any flak publicly regarding being a member of the LGBTQ community.”

As mayor, Bridges wants to be an advocate for foster children. He and his husband adopted two teenagers earlier this month and they routinely house foster children. It was the state Senate passing an anti-LGBTQ adoption bill in the 2018 legislative session that motivated him to make the state House run.

“Let’s be honest, in the state of Georgia we have a foster crisis on our hands,” he said. “We need to get more LGBTQ members as well as the community in general to open up their homes to children in need. I know of five LGBTQ [foster] parents in the Chatham County area, but with the huge amount of LGBTQ people that live in this county, more of those can open up their home as well.”

Qualifying for the Pooler mayoral race is in August and the election is Nov. 5.

Bridges would become the second openly LGBTQ mayor in Georgia if elected. Doraville City Councilmember Joseph Geierman is trying to achieve the same feat in that metro Atlanta city’s mayoral race in November. Hiawassee Mayor Liz Ordiales, a lesbian, was elected in 2017.