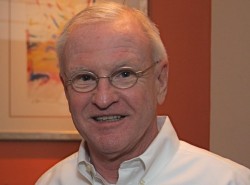 A gay homeowner in Midtown learned a tough lesson this week: Youths making door-to-door solicitations for charity may really be casing your house. Andy McKinnon (photo), who publicly backed Mary Norwood last year and hosted political fundraisers, was among Midtown residents who got both scammed and later, burglarized, by three youths pretending to raise money for Toys for Tots. McKinnon gave them $10 on Tuesday, only to return after a workout the next day to find his home ransacked and several items stolen. Fortunately, the thieves are sloppy, leaving behind fingerprints, blood and snapshots that a neighbor took after they hit her up for cash. [AJC]