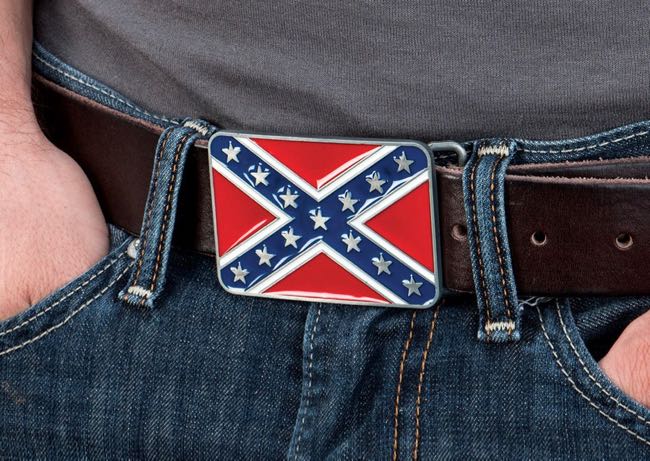 A gay Kennesaw man, disturbed by the deadly rally white supremacists held in Charlottesville, launched an effort calling for the removal of a Confederate flag from a city park in the Atlanta suburb.

Reid Jones said the rally in Virginia inspired him to take action at home.

“What we are advocating against is the flying of a Confederate flag on city property,” Jones said.

The flag flies at the corner of Main and Cherokee streets, just steps away from the Southern Museum of Civil War & Locomotive History. The flag is inside a park that also houses monuments and plaques honoring veterans and a 9/11 memorial.

Jones said the flag is dedicated to William Fuller, a Confederate train conductor who played a key role in the “Great Locomotive Chase” in 1862 during the Civil War. Fuller chased a group of Union spies who stole The General as they tried to travel to Chattanooga. The Union soldiers were caught and several were executed.

“His legacy is not something to be proud of,” Jones said.

On Monday, Jones launched an online petition urging city leaders to remove the flag. Nearly 2,300 people have signed “Remove the Confederate Flag From Downtown Kennesaw” since it went live.

Jones and other supporters plan to attend a City Council work session on Wednesday to help make the public aware of the petition and the Confederate flag. On Monday at 6 p.m., Jones is organizing a peaceful protest – Rally at Kennesaw Confederate Flag Post – and asking supporters to pack the City Council meeting to argue for the flag's removal.

“I am hoping to have as many people as possible to make public comments and a rally. It needs to be peaceful for the sake of everyone,” Jones said.

Jones, 19, said the petition and protest against the flag is his first foray into activism.

Jones, who self-identifies as queer, urged other LGBTQ people to engage in battling Civil War monuments across metro Atlanta.

“If you don't support the people around you, who in the world is going to support you? I want as much support for gay, trans and bisexual rights in this county and I can only make allies by doing this. It's the right thing to do. This flag represents the fear that people feel. It's an embarrassing time for our county and it is not something to be glorified,” Jones said.

The Confederate flag, in present-day America, is commonly used as a symbol racism, slavery, white supremacy, and sectionalism of the southern region of the United States, as recently seen in Charlottesville, VA. It is often equated and used in companionship with the Swastika flag of Nazi Germany.

The removal of the Confederate flag from the public flag pole in downtown Kennesaw would serve as a message to all that our community strives for equality and unity, rather than disparity and division.

The Confederate flag in Downtown Kennesaw is commemorated to William Fuller, a Confederate train conductor whose reclaiming of the General during the Civil War lead to the deaths of 8 Union raiders who attempted to acquire the train for the Union and destroy railways used to support the Confederacy. This man is not someone worth idolization or commemoration.

“To the Memory of William A. Fuller (1836-1905) Captain Independent State Troops of Georgia, C.S.A. As conductor on the state-owned Western & Atlantic R.R. he led the pursuing party that, after a 90 mile chase in which three locomotives were used recaptured the locomotive General which had been seized at Big Shanty, April 12th, 1862 by a group of federal raiders led by James J. Andrews intent upon the destruction of the railroad bridges between this point and Chattanooga.”