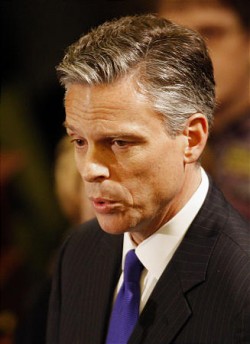 There’s a liberal parading about the State Capitol on Wednesday. And he’s a Mormon. Call out the Georgia National Guard, storm the Gold Dome and rid it of this gay-loving Jon Huntsman. His tolerance might be contagious. If you’re weary – or leery – of Georgia’s two home-baked presidential prospects Herman Cain and Newt Gingrich -- and you should be -- then head to downtown Atlanta for a glimpse of Huntsman (photo). But hurry. Once the conservative, gay-hating Republicans that run the place, led by Gov. Nathan Deal, figure out that Huntsman not only tolerates the gays but favors allowing them to get hitched into civil unions, they will kick his Republican ass right out of there. Well, at least after they finish targeting gay state lawmakers in their sweeping redistricting proposal.

GOP presidential candidate Jon Huntsman will make a whirlwind tour of the state Capitol this morning, dropping in on Gov. Nathan Deal, Senate Majority Leader Chip Rogers, and House Speaker David Ralston. Look for Huntsman to make a brief appearance on the House floor, but the former U.S. ambassador to China (and Singapore) has no media availability scheduled.

But seemingly ready to throw some red meat to Georgia Republicans, Huntsman has been touting his religious creds of late.

"I have a deep belief in God. I'm a very Christian person, I am very proud of my Mormon heritage. Mary Maye draws from an Episcopalian background, you blend traditions and try to raise kids in a responsible fashion, and you come up with something that is kind of a hybrid model that, first and foremost, puts God at the center of your life. ... I'd say, you know, there are 13 million Mormons around the world today. It's increasingly a very heterogeneous bunch and we add to that diversity. I come from a long line of saloon keepers and proselytizers. Rabble rousers in the bunch. The Mormon population is a lot more diverse and a lot more heterogeneous, a lot more free thinking that people might give it credit for."

Will Fred Karger be next to glad-hand the state’s GOP brass? Probably not. Even the Republicans in his own state don’t like this guy. And it has nothing to do with him being gay. No. Not at all.