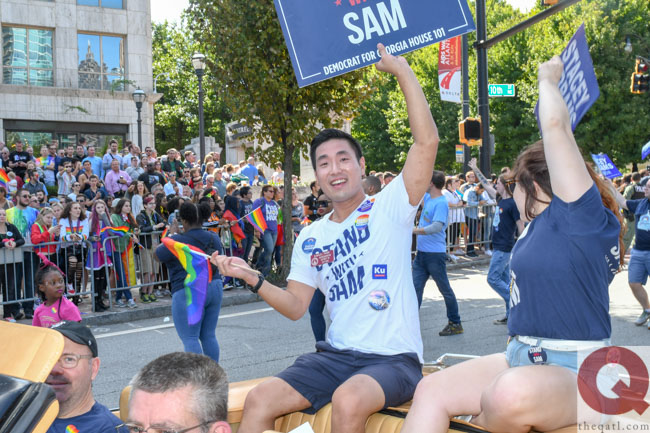 State Rep. Sam Park is on a mission to follow through on his personal goal to expand Medicaid. But he must first face the Republican whose House District 101 seat he took in a 2016 upset.

Park (top photo) – the first openly gay and first Korean-American man elected to the Georgia legislature – campaigned on expanding Medicaid in 2016 in part because his mother was battling cancer and he wanted others to have the access to healthcare that she had. Park’s mother succumbed to the disease in 2017.

“We’ve introduced legislation, had a press conference, but unfortunately given the partisan makeup of the state legislature, we were not able to move it forward,” Park said. “If Stacey Abrams is our governor, I would be very surprised if this doesn’t come up during the first year, or some compromise being reached to help us move forward on this issue that’s really hurt a lot of folks in Georgia.”

Abrams has made Medicaid expansion a signature issue of her campaign for governor.

“With Medicaid expansion, we’re not just talking about insuring the lower income population, we’re talking about ensuring access to care with those living with HIV,” Park said. “There’s just such a broad impact that this can have and so many people that this policy can help, I think it’s really something that’s so important.”

Park said he learned many lessons in his first two years under the Gold Dome representing the Lawrenceville-area district. Chief among them is that Democrats need to take back the House to move legislation forward “in a meaningful way,” he said.

“The other part of it is frustration because Georgia is a purple state in my opinion,” he said. “Donald Trump won the state of Georgia by 50.4 percent. Yet the state legislature has a two-to-one Republican majority explicitly because of gerrymandering.”

“We have a long way to go until we have fair representation, and I think that if the legislature fairly or accurately reflects the people they serve, we’ll be able to move forward on issues like Medicaid expansion rather than focus on partisan politics. These are common sense issues that benefit the state,” he added.

Park faces retired educator Valerie Clark in the Nov. 6 election. Park scored an upset win against the then-incumbent lawmaker two years ago and won by little more than 400 votes. Clark vastly outraised Park in the race and campaigned on her legislative record, which included voting for a controversial anti-LGBT “religious freedom” bill in 2016.

“I’d say I would represent the new Georgia and she represents the old,” Park said. “In terms of perception, in terms of even our vision for our community and the state of Georgia.”

Clark did not respond to an interview request from Project Q Atlanta.

Park said the chances of “religious freedom” legislation being introduced again depends on one major factor.

“If Brian Kemp is our governor because he has been explicit in his support for religious liberty and we have seen that an elected official will do what they say. We’ve seen that with Donald Trump,” he said. “If Stacey Abrams is our next governor, I would be very surprised if there is any kind of legislation that would be introduced that would harm the LGBTQ community knowing that she has the power of the veto.”