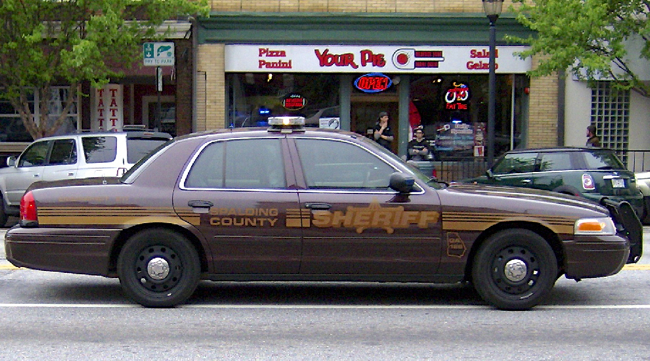 A gay metro Atlanta man says he was struck in the face as he intervened for a gay couple being harassed by a bar bouncer for sharing a quick kiss.

Lefty Lawson says a bouncer at Buckshots Saloon charged him and hit him on the left side of his face during a heated argument after the bouncer confronted his gay housemates, Joshua McElwaney and Robert Rollins. The country and western bar is in Griffin, a city about 40 miles south of Atlanta.

The three gay men, who are housemates and live in Griffin, were at the bar with a larger group of friends on Aug. 24 for several hours before the confrontation, Lawson says. But when McElwaney and Rollins, who are boyfriends, kissed about 1:30 a.m., a man posing as the bar's owner and a security guard approached. McElwaney says the man complained about the kiss and when the conversation grew heated, Lawson interjected.

"I asked the guy if there's a problem," Lawson says. "He said he is the owner of the club and said he didn't put up with this gay kissing. So I said they can't be gay in here? And he said no."

Lawson says the trio decided to leave and as they walked out, Lawson flipped off the men who confronted them. That's when the incident turned physical.

"As I walked away, I flipped him off and he flew through three people to hit me in the face. I got more belligerent and my friends had to grab me. The security guard had me escorted out."

Lawson says he didn't suffer any injuries, but immediately reported the altercation to an off-duty Spalding County sheriff's deputy working security at the bar. An incident report was filed and investigators are looking into the case, says Capt. Tony Ranieri, chief investigator for the Spalding County Sheriff's Department.

"We possibly have a hate crime here. I don't have any answers at this point," Ranieri says. "When Mr. Lawson and his two friends were escorted out, that's when Mr. Lawson got with the officer working security because he claims he was hit by one of the other guys. He got involved because his friends were getting thrown out of the club for kissing."

On Aug. 25, about 12 hours after the incident, the bar posted to Facebook that the person who apparently assaulted Lawson is not the owner.

There was an incident last night regarding an imposter acting as the owner. The person acting as an owner assaulted a patron of our bar, and exclaimed that he was the owner. THIS IS NOT THE CASE. Our owner was at home with his daughter during this cowardly and unprovoked attack. We at Buckshots welcome every person, creed and color. We hope that one prejudice customer that has now been banned will not discourage anyone from coming to our establishment.

The post ignited a firestorm of reaction and nearly 200 comments. Ranieri also said the alleged assailant was not the bar's owner. Sheriff's investigators have since interviewed the three gay men involved.

Lawson says the bar's owner called the men to apologize and tell them the apparent assailant was banned from Buckshots and the security guard involved in the incident was fired.

"I really don't know what we want to happen. Bigotry is going to go on and on, but I just need it to be known that I won't tolerate it, especially when it's with my friends," Lawson says.

McElwaney says the kiss he shared with Rollins was quick and that he was "shocked" at the reaction by the bar employees.

"It was just downright disgusting that this happened. We were not even making out. It wasn't even sexual. He leaned over and gave me a kiss on the lips. It was innocent," McElwaney says.

Rollins says the reaction to the kiss surprised him, too.

"It's a shame that I can't lean over and give my boyfriend a kiss. It's not like we were making out," Rollins says.