Gay jocks find home on the rink with GForce 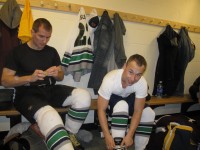 You’ll forgive the GForce if they aren’t dwelling on their loss to a bunch of straight guys earlier this year.

The gay hockey team, a collection of 15 players from cities across the country including Atlanta, lost a competitive match in January at the Friendship Cup, a part of the annual Aspen Gay Ski Week.

But now the team is in the middle of another battle, hoping to best 36 other gay sports clubs from across the country in a contest on Outsports.com. The site kicked off its Local Groups Challenge earlier this month and voting put GForce into the second round against Cheer San Francisco. (You can vote in the second round through Monday.)

They do so after spending the winter wondering if the team could even afford to host the Friendship Cup. But after putting out a fundraising call, the team raised more than $10,000 from fans.

We recently caught up with Rich Kuerston, No. 22 for GForce and the team’s only member from Georgia, to talk about the Aspen game and what it’s like to compete against a group of straight players.

Q: Thoughts about how the game went?

The game went well, however this year we faced some of the toughest competition we’ve seen out in Aspen. The altitude is always an issue — at 8,200 feet you’re lucky not to be exhausted after skating half the length of the ice — but this year I think it all came down to the fact that we were playing another great team. Certainly a respectable outcome, but definitely not the one we’d hoped for.

Q: You guys lost at the Friendship Cup 5-4. Your thoughts on the team’s play?

We had several practices prior to this year’s game, and you could really see the team incorporate what we had worked on into the game. Our breakouts were as fluid as I’ve seen them and our offensive positioning was also very strong. From that standpoint, we were very content with our play.

All of our goals came from the same line, so I think we all would agree that our scoring needed to be more spread out. We just need more guys (myself included) to put the puck in the net when it counts. Other than that, we played extremely well.

You have to remember that we only skate with each other four or five times a year. GForce is made of players from about 10 different cities. The rest of the time, we’re skating with entirely different groups of guys, so it’s not quite as easy to gel with your line mates. After three wins in a row, a 5-4 loss is nothing to be ashamed of.

Q: What can gay guys learn playing against straight ones?

I think gay athletes playing against primarily straight teams can learn the same thing we’re trying to teach them — not to stereotype. Some are more accepting than others. And some have better attitudes than others.

It’s important for us to hit the ice (or field or court) with the best possible attitude and with the most open minds possible. And the purpose of G-Force is to create as accepting an environment as possible by demonstrating that all players, regardless of their background or orientation, can compete at an impressive level of play.

So the whole idea is for everyone to go out, skate hard, and give 110 percent. If someone from either team happens to pick up a particular skill or tactic from an opposing player on either team, than the experience is that much better. I’m sure we learn as much from them as we hope they learn from us.

Q: What can straight guys learn playing against the gays?

I think the most obvious, and perhaps the most surprising, thing they recognize is that we’re just as competitive as they are in terms of both intensity and skill, if not more so. Most of the teams we play expect us to show up, but I doubt many of them expect us to take it as seriously as we do or to demonstrate the skill we do.