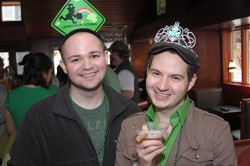 St. Patrick’s Day is a holiday never known as a celebration of sobriety. So it was the case on Saturday when scores of LGBT folks took part in the St. Paddy’s Gay Pub Crawl that snaked its way through Midtown.

The day-long event marked the first foray into LGBT promotions for Atlanta Bar Tours, which apparently does this bar crawl thing quite a bit. They partnered with Chris Coleman Enterprises, which knows its way around a gay event or two, and ended up with a pub crawl that included eight popular spots in Midtown. 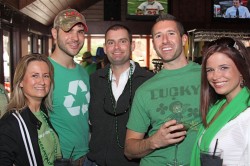 The day kicked off at the Nook and by the time our cameras caught up with the tour two stops later at Einstein’s, things were starting to get interesting. Maybe the alcohol was kicking in or the crowds were just growing. A few players from the gay Atlanta Bucks Rugby Football Club didn’t hurt, either. Those rugby jocks can pack away some cocktails.

But when the crawl made its way to Joe’s on Juniper, it crashed into a beer bust hosted by the Wet Demons, one of the teams in the Hotlanta Softball League. Then the party was on.

The evening ended with a triple play of stops at Zocalo, Gilbert’s and Nonna Mia and then an after party at the W Atlanta – Midtown.