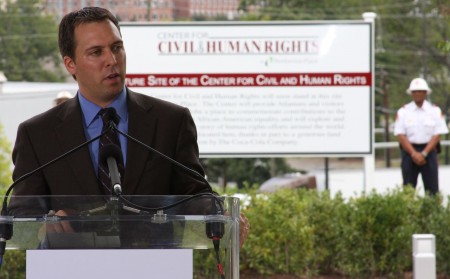 When Rev. George Hyde led the first church known in the U.S. to openly minister to gay men and lesbians in Atlanta, he could hardly envision his place in history some six decades later.

But the story of Hyde and his independent Catholic congregation is expected to be among the gay moments in Atlanta’s history included in the Center for Civil & Human Rights when the $125 million facility, expected to break ground next year, opens in 2011.

“There are a couple of different places that specific gay and lesbian issues come in,” says Doug Shipman, the center’s executive director (top photo). “You have both a historical piece and a contemporary piece. You’ll see that in exhibitions and in programming. We have very specially outlined how we want to tackle the issues.”

Shipman joined Atlanta Mayor Shirley Franklin and Neville Isdell, chairman of Coca-Cola’s board of directors, (bottom photo) on Monday morning at the 2.5-acre Pemberton Place in downtown to announce that the site tucked between the Word of Coca-Cola and the Georgia Aquarium and near Centennial Olympic Park would house the facility. Coke offered the land as a potential site in October 2006.

Highlighting the parcel and its nearby attractions, along with the Georgia World Congress Center and MARTA stops, Franklin called it a “location that brings people together on a daily basis. We are creating our own kind of center that allows people to visit far and wide.”

“The center will be not the only thing that one would want to know about civil and human rights in the country or the city, but become a portal to all of the other activities and programs,” Franklin says. “This will allow us to tell the story in a way that connects us with others.”

[h4]Breaking ground[/h4]
The center is scheduled to break ground next year. Once complete, organizers say it will commemorate the contributions of Atlantans and Georgians to the historic struggle for African-American freedom and equality as well as showcase the continuing struggle of human rights efforts across the globe.

Shipman says a content committee of scholars, activists and museum experts developed a road map for the center that details what should be included. The center’s exhibit design team will use that to develop a plan for exhibitions in the 100,000-square-foot facility. A rough draft of the plan will be aired in a series of public meetings beginning in October. 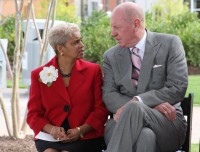 The content includes several gay historical moments, from the era that preceded the Stonewall Riots in 1969 to gay figures in the larger Civil Rights Movement and contemporary issues among gay and lesbian rights, Shipman says.

[h4]Economic impact of $1.3 billion[/h4]
The center projects to attract 800,000 visitors in its first year and create 1,150 jobs, along with generating a $1.3 billion economic impact over its first 10 years in operation. Almost half of the project’s estimated $125 million cost has been raised, through the center faces a competitive atmosphere for donations.

“The struggle for human rights is a universal one and also, of course, an unending process,” Isdell says. “I can think of no better use for this land than for the center for civil and human rights. There were other people, I can tell you, that coveted it.”

View a Project Q Atlanta photo album from the event.