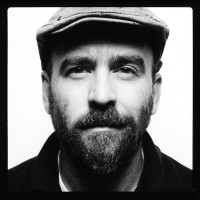 We’ve been chomping at the bit since our sneak peek into the locals included in “Gay in America.” Finally, we chat with former Atlantan Scott Pasfield as he prepares to bring his groundbreaking collection of portraits to Outwrite.

In the coffee table book, stunning photos of men from every corner of the United States are accompanied by their widely varied personal stories to provide a diverse look at what it means to be “Gay in America.” More than just a book signing, Pasfield (top photo) brings several of his subjects from the metro area to create a highly anticipated Outwrite event on Thursday that promises to also spin a vision of “gay in Atlanta” as well.

The two couples (including Todd and Jason, second photo) and two single men from Atlanta are just six of the 140 men profiled the book. Before he hits town to reunite with some of them, the New York-based photographer talks about his inspiration, the variety of gay men he met across the country, and his love for the Varsity.

What was your inspiration for “Gay in America?” 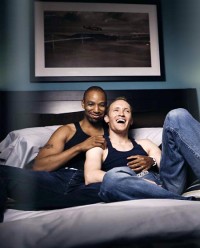 I did it to make a difference with my photography. I wanted to make a book that I wished had been around when I was a kid. Gay men are still stereotyped in so many ways, and I wanted to show what I knew as the reality and variety of out, proud gay men out there. I wanted to dispel that notion that gay men were only a certain kind of man.

I also did this book to reawaken the artist within myself. This was my dream assignment that no one had ever given to me, so I gave the job to myself.

How did you stay motivated for the years-long project?
I had this goal, to reach all 50 states, and that motivated me. It was an obsession. As I worked on it, I was constantly motivated by the men that I met and the stories they were sharing with me. It took special people to open up to a complete stranger.

I had some setbacks during that time, too. I blew out my knee skiing and had some physical rehab during that period and I had foot surgery also, so that slowed me down, but I never gave up.

What type of reaction has the book received?
There have been some pretty amazing reactions and reviews so far. People are saying that the book needs to be in libraries across the country, that bullied teens and closeted gay men need this book.

People are surprised by how the stories are so personal, that they don’t have to do with these men’s status. There isn’t a focus on people’s resumes, or careers, like the many lists of fabulous gays out there we see glorified in magazines. This book is about human stories and powerful little snippets of life; emotions, heartache, survival. It makes you cry, it makes you laugh.

Do you keep in touch with any of the men in the book? 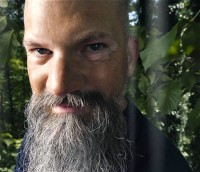 Absolutely, especially over Facebook. It’s been such a great thing to make so many friends and to stay in touch online. Many have become such fierce advocates for the project, helping to promote and publicize the book.

You know, before I did this, I watched “The Secret,” and I wrote down some things that I wanted to do – travel, make new friends, reignite my passion for photography, and make a difference – and all of those things happened in the course of this project.

Who can we expect to meet at the Atlanta signing?
As Georgia was the second-grossing state in the book after California, I’m hoping that many show up at Outwrite. I believe David (bottom photo), Jason and Todd have mentioned they will be there. I look forward to seeing them, because it really lets things come full circle. Plus, I went to school in Atlanta, so it will be nice to be back.

Where did you go to school?
I went to Georgia Tech for architecture, but then I graduated and became a photographer.

What are some things you are looking forward to about coming back to Atlanta?
The Varsity! [laughs.] I used to live across from there for years and love their burgers. I’m looking forward to seeing friends, good weather, good food. I’ll be there for a few days, so it will be great to catch up with people.

Have any of the subjects had any unusual things happen to them as a result of their photograph appearing in the book?
Life goes on and changes for us all. Many of them have had things happen subsequently, and in some cases we updated the stories to reflect the changes. But I tried to keep the stories accurate to the moment in time the photographs were taken. Doing these types of portraits holds a mirror up to people, and sometimes the reality of what people see is therapeutic. It often helped people deal with certain issues of self-acceptance to see themselves honestly through another’s eyes.

What is your concept of being gay in America? Has the book changed your view?
It is more diverse and varied than I ever imagined. I found so many different types of men living wonderful lives everywhere. We are as varied and diverse as the rest of the population.

It is important to be out and open and honest about who you are. Those who love themselves and are truly happy with themselves seem to live very fulfilled lives. It is as important for everyone to come out, celebrities and regular folks alike. In doing so, we all become role models.

I wanted to document and explore the realities of gay men in this country. It raises many questions of what does it mean to be gay in America. It didn’t change my perceptions; it reinforced my belief and hope for what is out there.

Pasfield photo by Platon; other photos by Pasfield from “Gay in America”

Buck Cooke is a freelance writer based in Atlanta and co-chair of the Entertainment Committee for Atlanta Pride. He comes armed with a passion for pop culture and rabid appetite for arts and entertainment, scouring the landscape for treasures in music, TV, books and cinema.